The Gimball video drone is designed to handle tough environments so a rescue team tested it in the Swiss Alps. Continue reading →

The flying Gimball video drone is designed to survive rough environments without breaking into a million pieces. But before this thing can go on a real search-and-rescue mission, it was sent down deep ice cracks in the Swiss Alps.

Swiss company Flyability developed Gimball as a "collision-resistant" drone that allows pros to explore inaccessible places. The drone's flying and video equipment are surrounded by a free-rotating spherical cage, allowing it to capture thermal information and high-definition imagery in real time so rescuers can locate victims in hard-to-reach spots.

Gimball started as a robotics project at École Polytechnique Fédérale in Lausanne, Switzerland. The roboticists were inspired by insects that can bounce off a wall and keep going. Being able to move through unpredictable environments is a must for any rescue drone.

Last spring Gimball won the UAE Drones for Good award, which came with a million-dollar development grant. More recently, Flyability teamed up with the Zermatt Glacier rescue team in the Swiss Alps for a serious test. They sent Gimball into deep icy fractures called crevasses more than 11,400 feet above sea level. Climbers can fall in them, especially ones hidden under thin ice, and get trapped.

"The embedded full HD camera, digital live video transmission and the powerful lighting system allowed the drone to operate in the heart of the mountain glacier," Flyability's press release said. Check out a video of the crevasse from the drone's perspective set to soaring music: 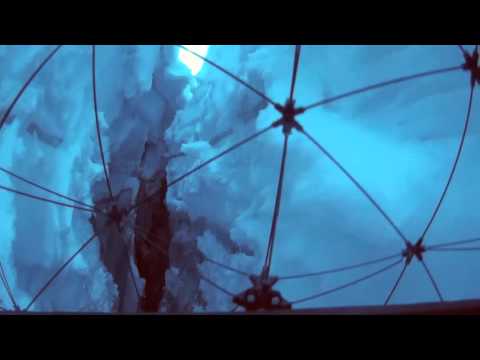 What surprised me about that video is the steadiness - despite all the tumbling, bouncing, and flying. The protective spherical cage spins around the whole time, but the footage looks like it came from a human-operated Steadicam.

So if you have the misfortune of falling into a crevasse or getting trapped in a collapsed building in the future, don't be surprised if this smart little drone comes to check on you. Help is a drone's throw away.