During a covert nighttime operation, four bottlenose dolphins were removed from an amusement park in Finland and transported to Greece, according to the Yle Finnish news service. The move was later confirmed by Attica Zoological Park in Greece, which now has the dolphins.

Animal rights activists for years had criticized Särkänniemi Amusement Park's dolphinarium in Finland. It had housed the four bottlenose dolphins, and the dolphinarium is now shuttered. The activists have also criticized Attica, but the Species Committee of the European Endangered Species Program recommended that the dolphins be moved to the Greek park.

The scene was certainly an odd one late Saturday night and into Sunday morning. First, a large cargo plane arrived at the Tampere-Pirkkala Airport in Finland. This was a clue to activists from the animal rights group Rights for Animals that the dolphins' move might be imminent, so a handful quickly made their way to the amusement park.

RELATED: National Aquarium to Move All Dolphins to Sanctuary

Observers say that shortly after midnight, four large white containers were hauled to two large trailer trucks. Water could be seen sloshing out of the containers, according to Yle. A bystander filmed one of the trucks from a distance. 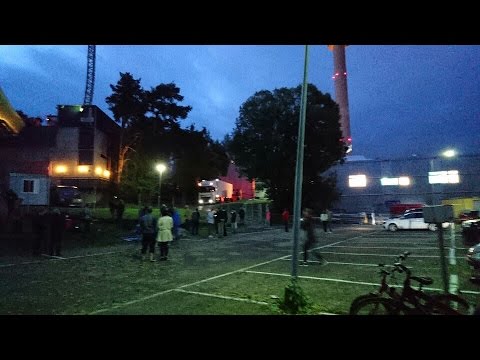 Under police escort, the trucks drove to Tampere-Pirkkala Airport and the containers were loaded onto the cargo plane. The flight was scheduled to depart for Athens at 4 am Sunday, but it was delayed for close to an hour.

Later that day, Särkänniemi's CEO Miikka Seppälä said in a press release, "This decision was the best alternative for Särkänniemi's dolphins. The dolphins will now have bigger living spaces and a dedicated staff providing them with all the care that they need. We have heard a wide range of experts in this field and researched all possible alternatives."

Activists had hoped to move the dolphins to a natural water sanctuary. Such facilities have been discussed for years by marine mammal experts worldwide.

Nevertheless, as Seppälä pointed out, "Dolphin retirement homes do not exist. I've had several confidential discussions about these alternatives, but there is no information available on when they will actually be built. I have consulted both Finnish and international animal rights organizations, and none of them had an actual solution to offer. The relocation to Greece gives Särkänniemi's dolphins a good place to live under the sun."

Attica reports that Särkänniemi's veterinarians and trainers are currently "staying with the animals in Greece to make sure that they are readjusting themselves properly to the new living conditions."

The Greek park also provided this photo to the media:

Time will tell how well the dolphins do in their new environment. The controversial move reveals there is no easy solution to resolving concerns over animals in captivity that are used to human care and can't just be released into the wild.

Even a sanctuary may not fully solve the problems.

Consider chimpanzees, which are also highly intelligent mammals. The National Institutes of Health announced last November that it would be retiring its laboratory research chimps and moving them to a sanctuary. Both ahead of that announcement and afterward, 13 chimps at a cancer research lab in Texas were transported to Chimp Haven, a sanctuary in Louisiana.

Since then, according to an article published in the journal Lab Animal, nine of the 13 chimps have died.

The cause of their death is unclear, Wired reports, mentioning that a transition to a new location can create an emotional toll on chimps, especially if other resident animals are involved.

At Attica Zoological Park, the four new bottlenose dolphins will be living with another four dolphins. All of the dolphins will likely "participate in educational presentations, but the park doesn't hold any performances solely for entertainment purposes," according to the Attica release.

WATCH: Dolphins Give Each Other Unique Names