Researchers placed mesh enclosures on reefs to keep coral larvae from floating away, which helped to form colonies.

Peter Harrison experienced a revelation around 36 years ago while studying the mating rituals of corals that comprise the Great Barrier Reef.

“The surface of the sea was literally a soup of sex — sperm and eggs in the countless billions,” the marine ecologist at Southern Cross University in Australia told Seeker. “I was looking at the slick on the surface and saying, ‘That’s how corals regenerate.’”

Today, Harrison’s insight has led to experiments that could rescue the threatened reef off the Australian coast, as well as other corals that are dying due to climate change, diseases, pollution, and blast fishing — the often-banned practice of using explosives to catch fish.

He’s has been collecting tiny coral larvae during spawning seasons, rearing them in tanks and “seeding” degraded patches of reefs with the critters, placing mesh enclosures of organza cloth — a material commonly used for wedding veils — on the reefs to keep the larvae from floating away. Under normal conditions, most larvae don’t manage to land on the seafloor, take root, and form colonies and reefs with their skeletons.

Harrison has experienced limited but important success in re-growing reefs. Five years after a pilot project involving 400,000 larvae in the Philippines, the corals he and his team planted are going strong. “They’ve gone from microscopic larvae that were less than a millimeter long up to dinner plate-sized coral in less than three years and become sexually reproductive,” he said. “We’ve closed the life cycle.” 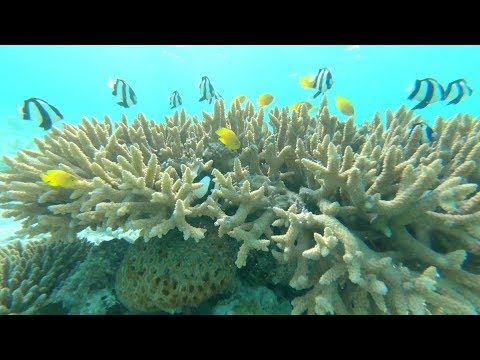 Late last year, he also confirmed that small test samples of larvae that he’d placed on a reef off Heron Island on the Great Barrier Reef in 2016 were taking hold.

Around the same time, with funding from the Great Barrier Reef Marine Park Authority, a government agency, he’s covered almost 6,500-square-feet on Heron Island and nearby One Tree Island with around 4 million larvae, an experiment that he hoped would lead to even larger areas if corals start forming in around nine months.

Harrison acknowledged that his technique wouldn’t stop global warming, pollution, and other threats to reefs. But he hoped in the future to plant larvae in different oceanic environments so he could figure out how pollution, temperatures, and other factors might affect the process. That might help researchers determine whether some corals can or cannot be saved. Ultimately, he hoped fish and game officials and similar authorities might someday reseed corals as a routine part of their work.

“We haven’t yet solved the problem. This isn’t a magic solution to the problem of the world’s reefs,” he said. “What it is, is research to understand how we might in the future scale this up.”

A decade ago, around 60 percent of the world’s reefs were either highly degraded, not functioning, or threatened. Today, in Southeast Asia, where corals are under the most threat, 95 percent of the reefs are degraded or threatened. Last year, the Great Barrier Reef Marine Park Authority announced that bleaching might have killed off as much as half of the Japan-sized reef.

“There is no reef now that is healthier than when I started in the 1980s,” Harrison said. “It’s just extraordinary and appalling at the same time that we are actually in this space and something as large and majestic as the Great Barrier Reef is in such dire straits that we now have to consider what we are going to do to rescue it.”

WATCH: What Are Coral Reefs and What Is Their Purpose?