Cockroach Robot Squishes Flat to Get Through Cracks

Using a real roach as inspiration, scientists designed a palm-sized robot able to splay its leg when compressed and move through tight spaces.

A cockroach could save your life. A robo-roach, that is.

The CRAM robot from researchers at the University of California, Berkeley, mimics a real roach's ability to squish down and squeeze through tiny cracks. That ability could make the robot ideal for scurrying through the rubble in disaster zones, looking for survivors.

When Kaushik Jayaram and his colleagues studied the American cockroach (Periplaneta americana), they were amazed at the insect's ability to run quickly through incredibly narrow spaces.

"They're about half an inch tall when they run freely, but can squish their bodies to one-tenth of an inch - the height of two stacked pennies," Jayaram said in a press release.

Using a high-speed camera, the scientists were able to film roaches dashing through narrow slits. The video showed that when the insects flattened their bodies, they no longer used their feet to run, but instead relied on the hair-like sensory spines on their legs to push against the floor and propel them forward.

Other experiments showed that the roaches were able to withstand compression 900 times their body weight without any injury at all. That might explain why stepping on one may not kill it.

With the roach as inspiration, Jayaram designed a palm-sized robot that's able to splay its leg when compressed. It also has a smooth, tough, and pliable shell that allows the robot to squish down to half its height.

Jayaram, who recently obtained his Ph.D. from UC Berkeley and is now a postdoctoral fellow at Harvard University, called the robot CRAM, for compressible robot with articulated mechanisms.

The research results were published this week in the journal PNAS.

See the American cockroach and CRAM in action below. 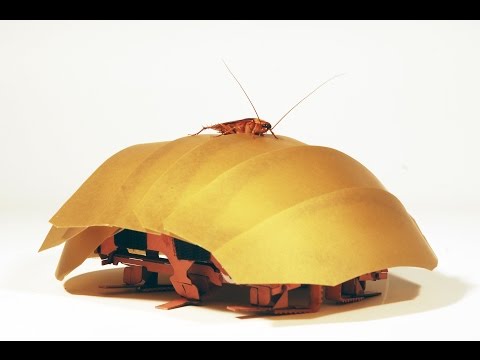 Animals got it going on. They fly better than humans, swim better, run faster, and hop higher. So it's no surprise that scientists are building robots modeled after creatures from the animal kingdom. Here are 10 of our favorites. Meet Spot, a four-legged robotic dog that can run over terrain, climb stairs and can handle a kick to the ribs without a flinch. Google-owned Boston Dynamics’ robot uses an electrical/hydraulic system and is designed for both indoor and outdoor operation.

BionicKangaroo is a robot developed by automation company Festo to technologically reproduce the unique way that a kangaroo moves. Just like a kangaroo, the robot recovers energy when jumping, stores it and efficiently uses it for the next jump.

A turtle-shaped robot named Beachbot, created by Disney Research labs, uses a retractable rake and onboard sensors to etch elaborate lines and designs in the sand.

The Great Elephant robot, which makes the French city of Nantes its home, is made from 45 tons of reclaimed wood and steel. The mechanical elephant can carry up to 49 passengers at a time on a 45-minute walk.

The Atrias robot is modeled after birds, which are arguably the fastest and most agile two-legged runners in the world. The robot, developed by researchers at the Oregon State University’s Dynamic Robotics Laboratory, has impeccable balance and can withstand kicks, punches and even a barrage of dodge balls.

The ACM-R5H robot, developed by Japan-based HiBot, is intended for inspection and search operations in underwater environments. In the front unit, a wireless camera is mounted to capture images.

German robotics company Festo is known for its animal-inspired robots. One of their latest creations is BionicAnt, a colony of small robots that work together to accomplish tasks, similar to how real insect societies work together toward a common goal.

The Navy recently deployed a robotic shark called the GhostSwimmer unmanned underwater vehicle (UUV), which is five feet long and 100 pounds. It is based on biomimetic design principles and can be used for intelligence, surveillance and reconnaissance missions, as well as hull inspections of friendly ships.

Boston Dynamics’ Cheetah robot is capable of running faster than any human, with speeds reaching 28.3 mph. It also has an articulated back that flexes back and forth on each step, mimicking the movement of a cheetah.

The T8, by Robugtix, is made with high-resolution 3D-printed parts, and is modeled after the movements of a spider. It has 26 different motors, with three in each leg and two in the abdomen.