Finnish computer scientists created an indoor rock climbing wall that has an interactive surface - and one of its tricks is quite "shocking."

This smart setup, which doesn't require donning any sensors, challenges climbers at their edge.

The Augmented Climbing Wall was developed by a team from Aalto University in Espoo, Finland. Their rope-less setup works with a ceiling-mounted projector and a camera system that has full-body motion tracking capabilities. Graphics are projected onto the bouldering wall, guiding climbers to holds. Climbers can browse through games and difficulty levels on a touchscreen computer near the wall.

The system can teach rock climbing techniques to beginners or challenge climbers to games like Spark, where the goal is to climb from beginning to end while avoiding moving "electricity lines." An earlier interaction had climbers avoiding animated chainsaw blades, but it was unclear whether they could touch the chainsaw handle, and the shape was limiting.

Another game, called Whack-a-Bat, projects a bat onto a hold that will fly to a different, random location as soon as the climber touches it. The climber has to touch the bat before a timer runs out. Special software detects the climber's position so bats never overlap with the body. As the game goes on, more bats appear, making it harder.

The wall has been in development for several years, but this version has actually been installed at a real commercial climbing center in Finland. Hundreds of climbers, including kids and adults, have tried it out.

"The system has been received well," the researchers wrote in a paper describing the wall. They added that the Spark game was even used for a route - also known as "a problem" in climbing parlance - in a bouldering competition last year.

The team, led by post-doctoral computer science researcher and avid climber Raine Kajastila, presented the wall recently at CHI 2016 in San Jose, where they received an honorable mention for best paper. See the Augmented Climbing Wall in action here: 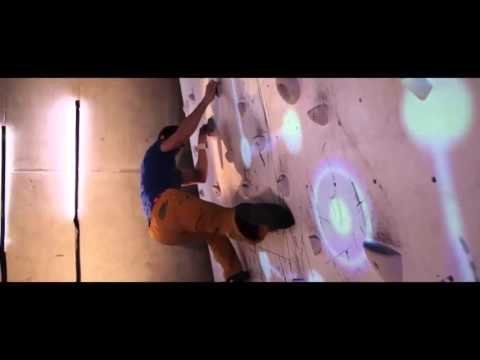 Climbing gyms with set routes tend to be really tough for me as my short arms attempt to stretch to impossible lengths for the next holds. I love the idea of an interactive wall that could challenge me at my level. Plus, it's ideal for gyms where the wall height is limited.

Virtually Teleport Yourself to a Friend's Living Room

Usually bouldering inside means getting stuck using whatever set holds are low enough. The Augmented Climbing Wall has nearly endless routes. These guys have solved one heck of a bouldering problem.

The virtual reality revolution is upon us -- finally. After years of hype and development, three consumer VR headset models are scheduled to hit shelves this spring. Industry watchers are treating it all as a Very Big Deal, indeed. Virtual reality films and educational titles will open up entire new vistas of experience, but the first wave of VR goodness will come in the form of immersive video games. Here we take a look at ten of the most anticipated games en route for the

, pictured above, is one of many multi-platform games designed to manipulate time and space by putting players in a richly detailed, 360-degree virtual world.

will come bundled with both the Oculus Rift and PlayStation VR headsets, and is likely to be most players' first introduction to virtual reality gaming. Advance word on the title, which supports team-based mutliplayer combat, is white hot.

uses a hand-mirroring design to accommodate two-fisted firing with Rift's motion controllers. Check out the

to get a sense of Epic's VR update to the classic first person shooter (FPS) genre.

In the space game

, players assume the role of an astronaut in peril, exploring the wreckage of an orbital station in a damaged

. Developers are describing Adr1ft as a First Person Experience (FPX) game, with combat and violence replaced by exploration and puzzle solving.

Sports simulations are expected to be a popular genre in virtual reality -- it's all the fun, minus the ligament damage.

will let players participate in hockey, football, basketball and baseball from an immersive first-person perspective. Rather than play through entire games, players will be dropped into short scenarios -- like defending the goal in hockey.

In terms of daydream scenarios, being a rock star is right up there with sports heroics for armchair gamers. At least, that's what developer Harmonix is hoping. Just last month, the company announced that its popular

franchise will be moving to the realm of virtual reality sometime this year.

Diablo 3: So You Want To Be A Demon-Slayer: Photos

to get a sense of the vibe. These guys know their Bugs Bunny, clearly.

suggests the interesting sideways directions that VR gaming can explore. Players can take on extreme rock-climbing challenges based on actual locations around the world.

One of the first games to support early iterations of the Oculus Rift code,

was released for PC and consoles back in 2014. Sega hasn't confirmed that a full VR version will be released, but that's the rumor, and the game's suspenseful, atmospheric gameplay is a perfect fit for virtual reality terror.

As the VR game market expands, you can expect some inspired goofiness, as well. The delightfully weird

line of games will migrate to virtual reality in 2016 with a new title featuring, um, alien autopsies on Mars. Guitar heroics, rock climbing, orbital surgery? This is going to be fun.

Does Virtual Reality Beat Drugs At The Dentist?