I Climbed Mount Everest in VR and Ended Up Playing 'God'

A virtual reality app that uses photorealism allowed me to summit Everest without actually risking my life.

I've always wanted to be the type of person who could climb Mount Everest someday, but all of the preparation, training, expense and actual mountain climbing that would be involved is just too daunting.

Luckily it's 2017, and there's virtual reality. Through the power of VR, I was recently able to experience the feeling of summiting Everest - minus the whole freezing cold and risking my life part.

Everest VR, a simulation that is available for Oculus Rift and Touch and HTC Vive, is an immersive VR experience that makes you feel like you're actually climbing the highest mountain in the world. It was released commercially by the Reykjavík-based virtual reality studio Sólfar and visual effects house RVX a few months ago, but this week they added a new climbing sequence and updated a unique "God Mode" feature at the end of the game.

Sólfar also announced on Wednesday that the Royal Geographical Society had accepted an Everest VR donation, which will be included in the Society's Everest Collection for educational outreach and training.

When I loaded the program and put on the Oculus headset, I immediately felt as though I had been transported from the 8- by 8-foot office I was standing in. I could see mountains, snow and ice in every direction, all of which looked very realistic owing to the fact that the developers created the application from actual photos of Everest.

"We used over 30,000 high resolution photographs of Everest and created an all CGI 3D model of the mountain using a process called Stereophotogrammetry," explained Thor Gunnarsson, co-founder and business development director of Sólfar. "This allowed us to recreate an extremely accurate 3D model of the mountain and then apply the actual photographs to it to create a VR version of Everest that is near photo realistic." 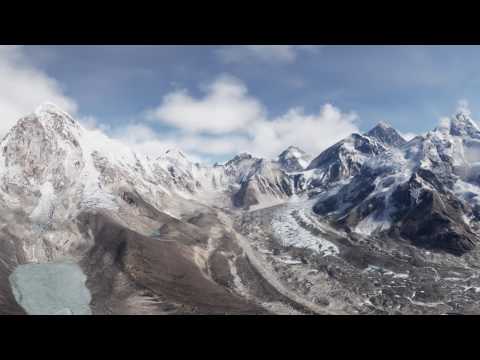 The photorealism did the trick, up until the game told me to start walking around. Suddenly I became very aware that I could easily crash into the walls of my very small room.

The game is designed to prevent that, however. Any time you get within a foot or so of a wall, a bluish outline appears in front of the wall that resembles a glowing 3D version of an excel spreadsheet.

With controllers in each hand that appear as floating gloves in the game, I started at base camp, where I picked up an apple and placed it on the altar for the Puja ceremony - a tradition that asks the gods to bless the Sherpas and climbers before the mountaineering portion of the expedition.

A raven landed on a pole that towered above me, a good-luck symbol before the journey.

RELATED: Why Is Mount Everest So Deadly?

I soon found myself crossing a frozen ladder above a steep drop-off, anxiously feeling that I would fall to my death if I slipped through the rungs. I made it across thanks to my floating gloved hands, which I used to hold the ropes on either side of me.

These hands turned out to be even more essential for the next challenge, as I spent what felt like an eternity ascending a vertical ice wall using a pick in my left hand and a rope in my right. Just as it looked like I was getting to the top, the rope became detached from the wall and all of the climbers, myself included, had to scramble the rest of the way up using two ice picks instead of one.

At the summit I was given the challenge of precisely placing a flag donning the words "Everest" at the very top, which was oddly harder to do than it looked. Having completed the task, I was given the option of entering "God Mode," one of the features that Sólfar recently updated, allowing me to shrink or grow myself to any size and teleport to other spots in the Himalayan mountain range.

WATCH: Journey to The Edge of Space (360 Video)

In God Mode, I hopped around to different peaks and took in the beauty of Everest from several vantage points, and particularly enjoyed adjusting myself to various dimensions. I viewed Everest as both a tiny speck and as an enormous giant, Alice in Wonderland style.

Sólfar designed their Everest experience with the intention of giving the less adventurous a little taste of what it's like to be on top of the world.

"We hope that those of us who will never have the thrill of climbing Everest can get a sense for what it feels like to be there, through the power of VR done well, to take us to impossible places," Gunnarsson said.

"[I want people] to feel the sense of vertigo, risk and exhilaration that climbers aspire to in the real world and an appreciation of the beauty of our natural environment, and how precarious our foothold on it really is," he added.

Sólfar has several other VR applications on the market, but Gunnarsson said they're currently developing something with more of a competitive edge.

"We're hard at work on our first original VR game," he said, "with more details to follow soon."