If you thought the headlines this week about how we only have until 2030 to avert catastrophic climate change were stark, wait until you read the fine print.

This week’s report from the United Nations’ Intergovernmental Panel on Climate Change says that limiting global warming to 1.5 degrees Celsius (2.7 degrees Fahrenheit) over pre-industrial times will require not only swift, sharp cuts in carbon emissions from human sources, but will also require still-unproven technology to remove heat-trapping carbon dioxide from the atmosphere.

This technology would also need to be scaled up and deployed within a decade or so, since the world is roughly two-thirds of the way to that mark already.

“If you take the science seriously, I think it says you have to pull out all the stops,” Kelly Levin, a climate analyst at the World Resources Institute in Washington, DC, told Seeker.

The 2015 Paris climate accord set a goal of limiting climate change to 1.5 degrees over pre-industrial times if possible — or to 2 degrees at worst — by the end of the century. Beyond that point, scientists warn that the effects of climate change will be disastrous for much of the world.

To hit the 1.5-degree target, we would have to start making drastic cuts now and bring emissions down to a net of zero by mid-century, said the IPCC’s report.

RELATED: How Sensitive Is Earth’s Climate to Carbon Dioxide Pollution?

“The report shows we are at the crossroads,” French climate scientist Valerie Masson-Delmotte, an IPCC member, told reporters. “What is going to happen from now until 2030 is critical, especially for CO2 emissions.”

That’s daunting enough. But nearly every scenario in the U.N. report includes a bit of “overshoot” — a period where global temperatures rise past 1.5 degrees and then fall back to that point by 2100. Carbon removal strategies could help reduce the fever, but the overshoot might inflict “long-lasting and irreversible” damage on vulnerable ecosystems before temperatures stabilize.

“The only true techno-fix would be a time machine, or large numbers of reflective white unicorns.”

Removing carbon from the atmosphere could take several forms. The simple, low-tech way would be to plant more trees, which consume carbon dioxide as they grow. Levin’s organization estimates that properly managed forests could absorb enough carbon to offset the emissions from a billion and a half cars.

“That is proven, and certainly they can be managed in ways to do more of that,” Levin noted. Forestry and agriculture would have to be supplemented by industrial processes, she added, but they “can certainly get you a long way there.”

RELATED: Rising Humidity Due to Climate Change Could Push Humans to Their Physical Limit

Those industrial methods can involve carbon capture and sequestration, which captures carbon dioxide from emitters like fossil fuel power plants and stores it elsewhere. Another idea is to use plant material to produce energy and then capture the carbon emissions released by burning that biomass — a process that’s known as “bioenergy with carbon capture and storage” (BECCS).

Yet another method, direct air capture of CO2, would be to capture carbon dioxide from the air using chemicals that bind to it. The captured carbon could be stashed underground or put to use to produce industrial chemicals, fertilizer, and even fuel.

Gregory Nemet, who studies energy systems and the environment at the University of Wisconsin, said that these technologies hold promise and could be scaled up to remove large volumes of CO2 — but he pointed out that they also “have side effects and concerns.” For instance, a demand for land to grow biomass for energy could end up impacting agriculture for food.

“One of the big concerns we have about climate change is food availability, crop yields, and water use, and here we’re talking about a solution that uses water and takes land that’s used for food,” Nemet told Seeker. “Those are things societies are pretty sensitive to, and small disruptions can have really big influences.”

Both of these carbon-capture technological processes are “in their infancy,” Levin said, and have potential drawbacks that would have to be overcome. The energy needed to suck CO2 out of the sky would need to be carbon-neutral, for instance, to avoid compounding emissions for the sake of absorbing them.

Meanwhile, at least two companies are already attempting to capture CO2 from the air on an industrial scale. The first, operated by the company Climeworks in Switzerland, went online in 2017 and is aiming to capture 1 percent of global emissions by 2025. The second, based in British Columbia and developed by the company Carbon Engineering, reported in August that it could capture up to a million tons of CO2 at a cost that’s competitive with other renewable energy technologies. 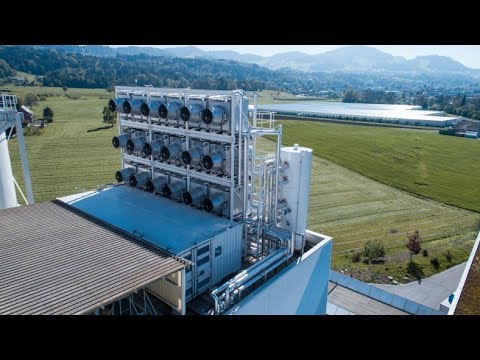 This form of direct air capture is harder than sequestering CO2 from industrial facilities, since CO2 in the atmosphere is 100 to 300 times less concentrated than smokestack emissions, according to a 2015 study by the National Academy of Sciences. But Nemet said that the biggest issue with sucking carbon out of the sky has been the cost, which the companies working on these projects say has fallen from around $600 a ton to less than $100 a ton in some cases.

“They’d have to scale up really fast,” Nemet said. He estimated that Climeworks’ goal of removing 1 percent of CO2 by 2025 would require building about 600,000 of the current small-scale plants.

“In a way, that seems impossibly large. They’d have to triple the output of their plants every year,” he said. But, Nemet added, “It’s not out of the ballpark. It would be about twice as fast as solar has scaled up.”

And if other companies follow suit, gigatons of CO2 removal may well be within reach.

Others are less enthusiastic about these prospects. Some, like Richard Heinberg of the Post Carbon Institute, see them as quixotic efforts that distract from the reality of curbing economic growth for the sake of reliably reducing emissions.

University of Pennsylvania climatologist Michael Mann told Seeker that hitting the 1.5-degree target is “extremely difficult, if not impossible,” while even the 2-degree target remains “an uphill challenge.” Reducing emissions and speeding up the use of renewable energy, he said, are a better bet than negative emissions.

“The only true techno-fix would be a time machine, or large numbers of reflective white unicorns,” Mann remarked. “I wish the IPCC would emphasize the importance of massive near-term reductions in carbon emissions rather than unproven, kick-the-can-down-the-road technology.”

RELATED: This Metal Can Convert Atmospheric CO2 Into Liquid Fuel

Levin said carbon-removal technology isn’t a “silver bullet,” but it could have other benefits — including boosting the use of renewables to produce the necessary energy. And so far, policymakers aren’t using the prospects as an excuse to avoid cutting fossil fuel use.

But given the news from the UN this week, she said, “it’s important to start understanding how we can scale this in the very near future.”