A 19-year-old zoo chimp named Azalea has a pack-a-day habit, but officials say she doesn't inhale.

A zoo in North Korea's capital of Pyongyang has found its star attraction in a 19-year-old chain-smoking female chimpanzee.

The puffing primate knows how to light her own cigs and she can even light one cigarette from the embers of another, according to the Daily Mail.

Her trainer says Azalea, one of the zoo's two chimps, does not inhale the cancer sticks.

While in some quarters the display might seem horrifying, the crowds seem to love it. The zoo, 57 years old, has been renovated in recent years, part of a broader effort by the country to improve its leisure facilities. It also houses traditional zoo animals such as elephants and giraffes, and its basketball-dunking monkeys are among its other crowd pleasers.

Here is Azalea, in an Inside Edition report: 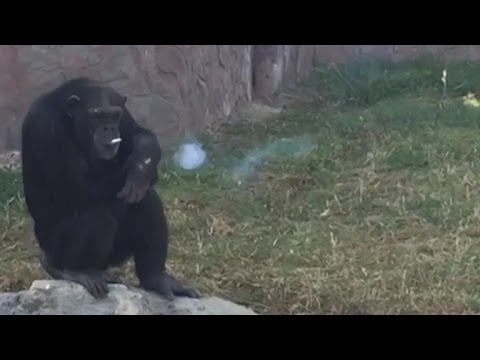 And here a chimpanzee enjoys a cigarette at Edinburgh Zoo way back in 1936.