Is it ice or not? New observations of the dwarf planet have revealed the possible spectroscopic signal of ice turning to vapor as the surface is heated by the sun.

When NASA's Dawn mission witnessed Ceres' weird bright spots up-close for the first time, planetary scientists were baffled. What material could produce such a bright feature on an otherwise grey surface? Now, a year since the probe arrived in orbit around the dwarf planet, scientists may be closing in on an answer.

However, it's not Dawn that has found the latest clue as to what these bright patches could be; it was a powerful observatory on Earth that noticed very slight changes as Ceres' surface is gently heated by the sun.

The bright spots in question are mainly clustered inside a large crater called Occator. Now that Dawn is in its lowest mapping orbit around the small world nestled in the Main Asteroid Belt (between the orbits of Mars and Jupiter), zipping across the cratered landscape at an altitude of only 240 miles, it has captured wonderfully detailed observations of the crater's floor. The bright feature is actually a cluster of bright spots with diffuse, almost powder-like material surrounding the brightest patches.

The leading theory, so far, is that it's an icy material such as water ice, but some kind of mineral deposit is also a possibility. Now, with the help of the HARPS spectrograph attached to the ESO 3.6-meter telescope at La Silla, Chile, it seems the ice theory has just become a whole lot stronger.

"As soon as the Dawn spacecraft revealed the mysterious bright spots on the surface of Ceres, I immediately thought of the possible measurable effects from Earth," said Paolo Molaro, at the INAF–Trieste Astronomical Observatory and lead author of a study published in the journal Monthly Notices of the Royal Astronomical Society. "As Ceres rotates the spots approach the Earth and then recede again, which affects the spectrum of the reflected sunlight arriving at Earth."

As Ceres rotates every 9 hours, HARPS is so sensitive that it can detect the very slight Doppler shift in spectrum frequency as the bright spots rotate toward and away Earth, but during observations for 2 nights in July and August 2015, more changes not related to Ceres' spin were detected.

"The result was a surprise," said co-author Antonino Lanza, also from the INAF–Catania Astrophysical Observatory. "We did find the expected changes to the spectrum from the rotation of Ceres, but with considerable other variations from night to night."

And it appears that these changes are consistent with some kind of volatile (ice) being exposed to sunlight and venting vapor into space, causing an increase in reflectivity. It seems that when Occator experiences solar heating, plumes are produced and then evaporate, creating a complex spectroscopic signal that evolves during that hemisphere's daytime. This finding appears to be consistent with earlier observations made by Dawn showing a mysterious haze over Occator.

We know that Ceres is rich in water, but whether or not these bright spots are due to water ice erupting to the surface has yet to be proven, though the evidence seems to become more compelling the longer we study the solar system's innermost dwarf planet. 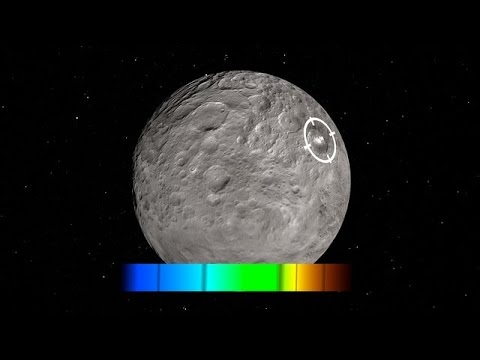 This image taken from NASA’s Dawn spacecraft in orbit around the dwarf planet Ceres shows the very bright patches of material in the crater Occator.

is going to get a real close look at the surface

. What the heck are those bright spots seen from afar? What sort of processes sculpt its airless surface? Scientists will get a better sense of this when the spacecraft moves from its previous orbit of 915 miles (1,470 kilometers) to just 235 miles (380 kilometers). Dawn began its maneuvers on Oct. 23 and will reach the lowest orbit of its mission by mid-December.

The spacecraft is expected to finish its work in mid-2016, and remain in orbit as a small satellite -- an artificial moon -- of Ceres. Meanwhile, in the thousands of pictures beamed back from the mission, scientists are starting to get a sense of what the surface really looks like.

This is actually a picture from February when Dawn was closing in on Ceres, but it gives you a sense of what the dwarf planet is shaped like. Unlike other members of the asteroid belt, Ceres is round -- that's what makes it a dwarf planet. You can also see some white spots on the surface that are still puzzling scientists after months of study.

ANALYSIS: NASA: We Need YOUR Help to Solve Ceres Mystery

While scientists were of course interested in what the pictures showed, back then the main purpose of these shots was for "optical navigation", according to the Dawn blog. "Just as when it reached its first deep-space target, the fascinating protoplanet Vesta, mission controllers have to discover the nature of the destination as they proceed,"

the blog said at the time

. "They bootstrap their way in, measuring many characteristics with increasing accuracy as they go, including its location, its mass and the direction of its rotation axis."

We can easily see that Ceres was

smacked by meteorites at different times

. In this picture, the crater to the left has much sharper edges than the prominent crater to the right, indicating that erosion -- probably erosion from other impacts -- has worn down the older craters.

A more careful look reveals that there are actually craters on TOP of craters as space rocks of various sizes, even down to the size of pebbles or dust, periodically crash into the surface of Ceres.

you can start to understand the geologic history

. The small craters you see inside occurred after the bigger crater was formed. The slumping walls show that erosion has started to occur. There's a bit of white on the surface, perhaps showing something exposed from below, and a small rille in the center.

This is one of the images scientists are using to get a better look at the white spots, which have been speculated to be water ice or indications of a mineral. "Occator is home to the brightest area on Ceres, which tends to appear overexposed in most images,"

about this recent composite image. "This view uses a composite of two images of Occator: one using a short exposure that captures the detail in the bright spots, and one where the background surface is captured at normal exposure."

As observers of Earth's moon know, when you start to look at an object in different lights, different features are visible. When the sun is directly overhead on the moon, the sunlight can wash-out some of the craters' sides. When it is at a steeper angle, the shadows start to show a little bit more detail. So by looking at different angles of Ceres (at different times of the day on Ceres' surface),

as this shadowy picture shows

, scientists can see a little more of its craters and its detail -- just by using simple geometry.