‘Casper' Octopus Could Be Threatened by Deep Sea Mining

The cute cephalopod discovered earlier this year likes to lay its eggs smack in the middle of rich seabed minerals.

A cute purple octopus that charmed the internet last spring may be at risk, thanks to its penchant for raising its young on a type of seafloor environment that has the eye of mining interests.

So suggests a new report published in the journal Cell Biology led by researchers from Germany's Alfred Wegener Institute.

The cute octopod in question is a tiny cephalopod found earlier this year in the Hawaiian archipelago, one that is likely an undescribed, new species.

In the new study, scientists have found that the creature tends to populate areas of manganese crust that are rich in the kinds of metals used in the manufacture of consumer electronics. The animals deposit their eggs among dead sponges in such areas. And, as they live at depths that can exceed 13,000 feet (4,000 meters), the water is so cold that eggs likely take years to hatch.

With such desirable metals located right where it likes to breed, then, the octopus could be in trouble.

"The brooding [location] is important as these sponges only grow in some areas on small, hard nodules or rocky crusts of interest to mining companies because of the metal they contain," said study lead Autun Purser, of the Alfred Wegener Institute, in a statement. "The removal of these nodules may therefore put the life cycle of these octopods at risk."

Mining the seafloor for all of its riches could make it impossible for the octopus to bounce back.

"This would be a great loss to biodiversity in the deep sea and may also have important knock-on effects," said Purser. "Octopods are sizable creatures, which eat a lot of other smaller creatures, so if the octopods are removed, the other populations will change in difficult-to-predict ways." 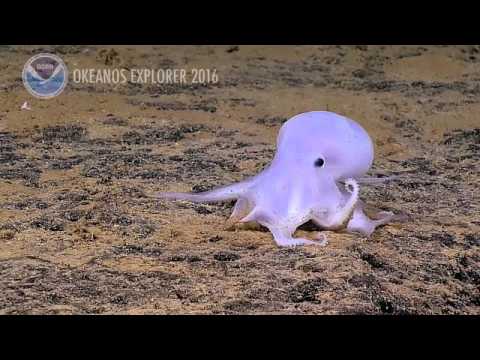 For some time, the seafloor has been postulated as the next big mining thing, akin to a modern-day gold rush. According to the Pew Charitable Trusts, rules governing deep sea mining are in the works but are not scheduled to come into force until the end of 2018. Until then, commercial deep sea mining is not allowed, at least in bodies of water governed by The International Seabed Authority, the world's only body charged, by its member nations, with regulating the issue.

In the meantime, however, nearly two-dozen contracts have been issued for mining exploration operations in the Pacific, Indian and Atlantic oceans.

It's easy to understand why. The bottom of the sea, depending on where you are, can be rich in the kinds of nodules of metal Purser noted. The so-called polymetallic nodules can contain a whole host of metals, including nickel, aluminum, silicone, rare earth metals, and iron.

"These nodules look a bit like a potato, and are made up of rings of different shells of metal-rich layers," Purser explained. "They are interesting to companies, as many of the metals contained are 'high-tech' metals, useful in producing mobile phones and other modern computing equipment, and most of the land sources of these metals have already been found and are becoming more expensive to buy."

Minerals sparking exploratory interest are also found among deep sea hydrothermal vents, making those areas attractive targets for mining too. Such sites, meanwhile, are as rich in life as they are in metals. Recently, for example, hydrothermal vent stacks in the Indian Ocean turned up six new marine species, amid a football-field-sized cluster of vent "chimneys" that are slated for future mining exploration.

WATCH VIDEO: Understanding The Weird Anatomy Of An Octopus