Butts Are to Chimps as Faces Are to Us

Primates recognize the buttocks of their kin just as well as humans recall familiar faces.

Chimpanzees can recognize each other from behind.

While chimps remember faces as well, new research has found that the primates recognize the buttocks of their kin just as well as humans recall familiar faces. Not only that, but our hairy relatives also seem to utilize the same type of brain processing for their neighbor's butt that humans use to spot a familiar face.

The ability to recognize one another is important for social animals. For humans, the face offers important information beyond identity, such as attractiveness and health. For chimpanzees, their buttocks can serve the same purpose . For instance, chimps can determine if the rump they see belongs to a relative or to a female that is ovulating. [Archerfish Spit at Faces They Recognize, with Training | Video]

"Faces are enormously important for people, and all the features of our faces are optimally arranged to be seen and to communicate," study author Mariska Kret, a neuropsychologist at Leiden University, said in a statement. "In the course of evolution, our faces have acquired more contrast: red lips, the whites of our eyes, eyebrows and a smooth skin that makes everything more visible."

Color also plays an important role for chimps. Kret explained that female primates have hairless faces and buttocks, making the skin features, such as color, more visible. Female chimpanzees' bottoms are red, deepening in color and growing in size when the female is ovulating. Primates' eyes are also able to easily distinguish red tints, the researchers said.

In the study, the researchers tested chimpanzees' recognition abilities by using the "face inversion effect" - a phenomenon in which the brain recognizes human faces faster than other objects, but not if those faces are inverted. However, when people see an object such as a house, they recognize it just as rapidly (or slowly) whether or not it is inverted. The exact cause of this effect is unknown. 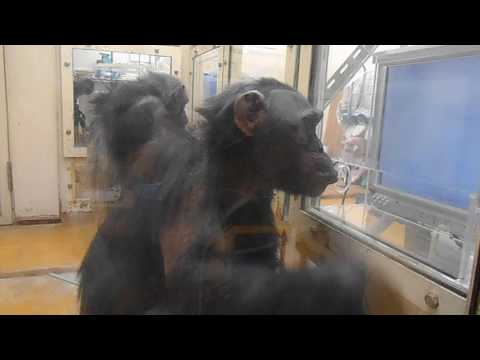 For humans, the "face inversion effect" was proven to only apply to faces, with inverted face images delaying humans' recognition. However, the humans recognized the buttocks quickly, whether the photos were upright or inverted.

When the chimpanzees were presented with images of buttocks, they were much faster to click on the buttocks image when it was upright rather than inverted.

"This is a good indication that this category has priority over other categories of objects," Kret said.

The findings were published in a study online Nov. 30 in the journal PLOS ONE.

WATCH:Why Do We Have Butts?