This fall, one garment is really going to slay during New York Fashion Week.

When you're finished, the mushrooms are only getting started. These carefully selected fungi live in special burial suits for deceased humans, moving decomposition along in a greener way than cremation or chemical embalming.

Although no one has actually, uh, worn the suit yet, the garment is going on display during New York Fashion Week next month.

RELATED: 10 Crazy Things to Do When You're Dead

The Infinity Burial Suit started as a concept by artist and MIT researcher Jae Rhim Lee, who was concerned about the environmental impacts of traditional burial methods. Since humans typically have numerous toxins in our bodies, those heavy metals and pesticides go into the ground or get dispersed into the air after death. Lee turned to mushrooms, and described her unique vision in a 2011 TED Talk.

"Maybe I can train an army of toxin-cleaning edible mushrooms to eat my body," she said at the time. After years of development, Lee's company Coeio started production on the suit and began accepting orders. Her current version contains a built-in biomix of mushrooms and microorganisms that break down the body and help neutralize toxins. A suit or shroud costs $1,500 while a casket liner goes for $750. The company also makes products for pets.

Coeio's garments will be on public display in Manhattan from September 8 to 30, coinciding with New York Fashion Week. The Ace Hotel is hosting the free Natural Causes exhibition and also running a contest for New Yorkers to nominate an environmentalist or do-gooding animal to win an overnight stay at the hotel plus a free burial suit.

Lee wants her work to symbolize a new way of thinking about death. "I'm no death-accepting ninja," she told The Creators Project recently. "But my work has given me an expanded perspective that grounds me and keeps my fear in check." The suit's first fearless adopter is a man named Dennis White who has a terminal illness and is the subject of the documentary "Suiting Dennis." 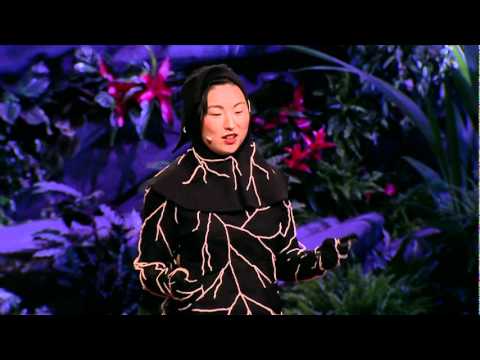