Bumble Bees Born with Ability to Buzz for Pollen

The chubby little fliers learn fast how to buzz more economically too.

Bumble bees are born with the ability to vibrate flowers and buzz pollen loose, and they get better at it over time.

Those were the key findings from a study published in the Journal of Insect Behavior by scientists from the University of Stirling.

VIDEO: Why Are All The Bees Dying?

The process examined in the the study is called buzz pollination, the buzzing itself known as sonication. Bumble bees basically just grab onto the pollen-producing anther of the flower with their mandibles and then vibrate their muscles to shake loose the pollen. (Other types of bee, including carpenters, do it, although honey bees can't.)

Led by evolutionary biologist Mario Vallejo-Marin, researchers from the university observed bumble bees interacting for the first time with flowers that would only release their pollen with a good shake.

Having never done it before, the bees vibrated the flowers instinctively.

Are Bumblebees Getting Alzheimer's?

What's more, they got better at this innate behavior with practice.

"Over time and with practice, bees are able to tune down their vibrations, removing pollen while potentially saving energy," Vallejo-Marin said in a press release.

"Initially bees tend to vibrate on the flower petals," he explained, "but after two or three visits they focus their efforts exclusively on the part of the flower where pollen is produced."

While bumble bees' nectar-collecting smarts are well understood, this changing of their vibration while in search of pollen is new, say the researchers. It also proves, they add, that bee buzzes made during flight and pollen collecting are distinct from each other acoustically.

"Gaining this insight into how bumblebee pollination behavior is innate, and yet perfected through learning, is essential to comprehend the complexity of pollination services provided by bees," said Vallejo-Marin.

"Only by studying how bees achieve these specialised behaviors," he added, "can we can really understand the consequences of declining bee populations for natural and agricultural systems."

Speaking of pollen collection, revisit this Australian blue-banded bee, in case you missed it at the end of last year. It was documented banging its head on flowers at up to 350 timer per second. Here it is in action: 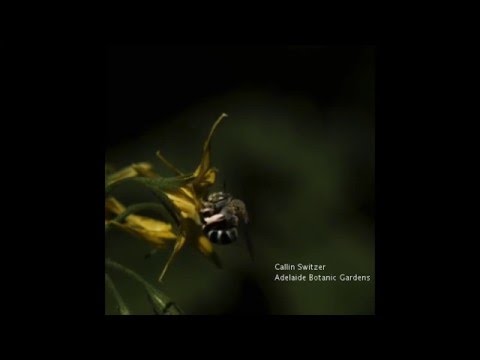 The U.S. Geological Survey is posting photos of insects on its

, offering a macro look at this hidden world. First up, this Festive Tiger Beetle (

) was found on top of a butte in Badlands National Park that had ancient windblown sand at its crest. Here, this sand specialist can build its long burrows.

This Agapostemon bee species is one of the most common native bees in the eastern United States. In almost any field there can be hundreds, if not thousands, of these bees visiting a wide variety of blooming plants. One of the largest of the sweat bees, it still goes undetected if you don't get down on your knees, face close, among the flowers. This one was collected at Colorado National Monument, Mesa County, Colo.

), a female from Grand Tetons National Park, was collected as part of a study of climate change. Most species in this genus are black , but a few, like this one, are as the Latin in name implies, glittering jewels.

This unknown wasp was collected in Cecil County, Md.

This is an unknown species of Robber Fly from Charles County, Md. Robber flies, a very large and widespread type of fly, feed on many different kinds of insects, making them a key player in maintaining the insect balance in different environments.

One species of the rarely seen leafcutting bee, this is

from the sandhills of North Carolina. Leafcutter bees are so called because they cut plant leaves to create the cells in their nests. The bees tend to build their homes in rotted wood or in the strong stems of plants.

is a type of jumping spider. This one was found in Beltsville, Md., but

lives in fields and prairies across North America. It feeds on seasonal plants.

Animal Superpower -- The Eyes Have It: Photos

Eggplant Tortoise Beetles like eggplants (go figure), eating holes in the plants' leaves. From the underside, the insects look quite queenly, with their ruffled collars. This one was gathered at the Patuxent Wildlife Research Center, in Anne Arundel County, Md.

, is endangered. Karner blue butterflies feed on nectar from many different types of flowers, but their larvae can survive on the leaves of only one specific plant, which has been decimated by habitat loss or change.

7 Insects You'll Be Eating in the Future

Deer flies like this one, despite their groovy eyes, deliver a ferocious bite. And no wonder: when the female bites (males don't bite), she lacerates the skin and when the blood flows, sponges it up with her mouth. There are over 110 species of deer fly.

Caterpillar to Butterfly in 3D: Photos

Centris bees, like this one, make their homes in holes, either in trees or in the ground.

The biggest visual difference between damselflies and dragonflies are their wing positions when resting. Dragonflies hold their wings open, while damselflies close them above their backs. This Ebony Jewelwing Damselfly (

) was found on a Beltsville, Md. stream.