Bubble Delivery Drone Sucks Up Package, Poops It Out

The FreeMotionHandling indoor flying object, goes anywhere, independently picking up and dropping off items where they're required.

This spherical bubble drone is at your service. The helium-filled FreeMotionHandling flyer from Germany-based Festo has a unique gripper designed to gently pluck objects and deposit them anywhere.

Unlike other grippers we've scene on robotic devices that work more like a rudimentary hand, clamping or pinching an object, this grabber is a sleeve also filled with helium. It slips down over an apple or a bottle, and then uses compression to hold tight. The maximum weight so far is less than a pound, so only small packages for now.

At fifty-four inches in diameter, this drone might seem obtrusive, but the transparent shell and floaty flight make it a lovely site.

It's powered by four horizontal rotors and four vertical steering drives attached to a carbon fiber ring around the middle. The ring also supports circuit boards and a Wi-Fi router.

Two onboard cameras - one located on the gripper and another on the outer sleeve - assist the drone in detecting objects as well as delivery locations.

The drone is neutrally buoyant and can rotate the angle of delivery to pluck an object from a ceiling or "hand" a parcel to a person. In other words, it doesn't need to pick up or set down objects from the ground.

At the moment, the air vehicle relies on a room equipped with 10 infrared cameras and eight infrared LED markers that track the sphere as it flies around. That data is sent to a computer that sends information back to the sphere to keep it on the right path.

But this is just a test model and future versions could use onboard GPS, cameras and other sensors to give the flyer realtime free motion. Take a look at the video below to see it in action. 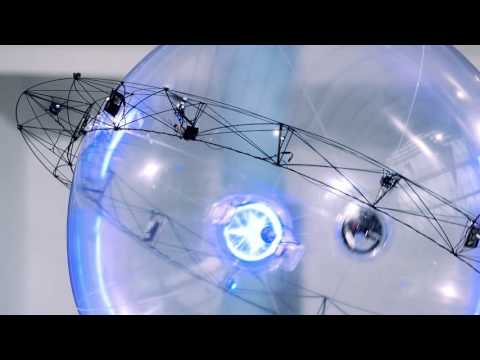