Florida beermakers brainstorm a way to feed marine life instead of trapping it. Continue reading →

A group of beermakers in Delray Beach, Fla., north of Miami, has created a way to sell six packs with rings that are made of biedegradable - and edible - material. 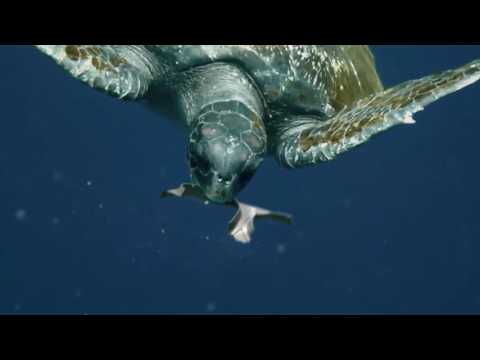 Between 40,000 and 110,000 metric tons of plastic from Americans end up in the ocean every year, according to a study in Science last year. Researchers said the plastic waste frequently comes from coastal areas - but some also makes its way through inland waterways to the ocean.

How Does Your Plastic Bag Get Into the Ocean?

Plastic can become stuck in sea animals' bodies along with toxic chemicals and bacteria absorbed by the material.

"We ideated, designed, prototyped and manufactured Edible Six Pack Rings," according to We Believers, a NY-based ad agency that partnered with the brewery on the project. "A six-pack packaging design that instead of killing animals, feeds them."

And while it's not clear that you'd want to encourage sea animals to eat beer packaging - biodegradable or otherwise - if this packaging does make it to sea, at least it's possible it will dissolve or can be consumed.

A calm, blue ocean can seem peaceful from a distance. Beneath the waves, however, bursts a cacophony of sound, the loudest and most disruptive of which are man-made, a form of noise pollution that disorients fish, mammals and other creatures. Anthropogenic noise -- sound generated by human activities including shipping, transportation, sonar communication, military activity and energy exploration -- can seriously disturb the behavioral patterns of marine life. Other environmental hazards aside, consider just the noise generated by the discovery, construction, production operations and maintenance of the offshore oil site seen in this photo. The ocean may be vast, but so is the presence of humans. That means that we have an effect on a broad variety of creatures at different levels of the food web. Ahead of the May 19 premiere of

on the Discovery Channel, explore some of the different ways noise pollution disrupts the lives of marine animals.

Sharks have lived on Earth for around 400 million years, but never have they faced the kinds of survival pressures placed on them by humans. Many shark species are vulnerable or endangered due largely to human activities like overfishing. Sound pollution also threatens some shark species. Sharks exposed to the added background noise created by anthropogenic activity suffer damage to their inner ear and other sensory tissues,

. Sharks are especially sensitive to low frequencies, within the same hearing range as sounds created by dredging, pile driving or shipping, according to the study. In addition to causing chronic or acute stress to the animals, which can affect behaviors and sensory functions, the noise can drown out important environmental sounds needed for communication, hunting and mating. The threat is heightened for sedentary shark species, such as the wobbegong shark pictured here, as opposed to migratory species, because they are less likely to leave the area to escape a persistently loud source of noise.

Most people have some idea of what a whale call sounds like. That low-frequency hum has been a staple of white noise machines for years. Of course if those recordings were more accurate, the whale songs would be drowned out by the sounds of undersea construction or propeller noise. Whale calls are a means of communication among groups of various species, such as the endangered North Atlantic right whales seen here. In order to be heard, some whales seemingly have to shout over the noise,

according to a 2010 study published in Royal Society Biology Letters

. Whales rely on sound for communication, navigation, feeding and mating. Shouting requires more energy and likely increases stress for these animals. Worse than shouting is when whales stop singing entirely, often leading them to stray away from area important to their survival in order to get away from the noise.

Like whales, dolphins rely on sound to "see" their worlds. Their clicks are used to coordinate with one another, detect prey, mate and more. When those sounds are disrupted by boat traffic or oil and gas exploration, dolphins' behavioral patterns are disrupted as these marine mammals become disoriented, often leading the animals to move away from the source of the noise. As with humans, constant exposure to loud noises threatens to do long-term damage to dolphins' ears. A dolphin that can't hear can't hunt, can't navigate, often can't stay very long with their pod, and therefore can't survive.

Video: Dolphins Give Each Other Unique Names

Large ocean dwellers at the top of the food chain aren't the only ones suffering from undersea sound pollution. Fish also struggle to cope with noise,

according to a 2015 Nature Communications study

. For the study, fish were exposed to two conditions: one in which they were exposed to natural background noise, and another in which motorboat sounds were played in the background. Physiologically speaking, the researchers noticed an elevated metabolic rate in the fish, Ambon damselfish (

), indicating a stress response. More importantly, the damelfish coping with the motorboat noise fared poorly when predators were introduced. Fish exposed to ambient noise had a 79 percent survival rate after the first three days; just 27 percent of those exposed to boat noise lived. "Noise-induced stress could reduce the likelihood that prey detect the approach of predators, and thus do not react with an appropriately rapid startle response," the researchers wrote.

These Fish Are Oddly Shaped for a Reason

Fish often get short-changed when it comes to perceptions of their intelligence. Just like other animals, they learn through experience and rely on that to make decisions throughout their lives. Weeks after hatching at sea, juvenile tropical fish depend on natural noise made my other fish, shrimp and sea urchins to select coral reefs where the new arrivals are most likely to thrive. Exposure to the wrong kinds of noise, particularly artificial sound, can lead the juveniles to become attracted to the bad neighborhoods, so to speak, for example construction sites or the backs of ships,

according to a 2010 study published in the journal Behavioral Ecology

. Even short-term exposure can be enough to distort a fish's sense of what's safe. Putting so many young fish into harm's way could not only be harmful to individuals but also entire fish stocks, with generations being led to unsafe waters by the overpowering lure of artificial sounds.

Half of the World's Farmed Fish May Be Hard of Hearing

In the early 2000s, a number of giant squid washed up along the northern coast of Spain. The squid perhaps not-too-coincidentally turned up near where ships were using air guns to conduct sound-pulse exercises. In 2011, a marine bioacoustician with Barcelona's Technical University of Catalonia and his team confirmed noise pollution generated by the ships was the direct cause of damage done to the squid,

. The damage included "mantles reduced to pulp, bruised muscles and lesions on statocysts," which are fluid-filled organs that help giant squid keep their balance. Given the physical effects and stress caused by noise pollution, it's no wonder that an ordinarily deep sea-dwelling creature would turn up on shore.

Like their fellow cephalopods the giant squid, octopi are sensitive to sound and can be affected by the low-frequency noises produced by humans in ways that threaten the tentacled animals' lives. Acoustic trauma causes damage to statocysts their auditory systems,

. In addition to affecting their balance and spatial orientation, the trauma can inhibit the animals' ability to hunt and evade predators. For the study, the researchers exposed the test cephalopods to "low intensity, short exposure" noise. Actual conditions in the open ocean, where sound is continuous and high intensity, "would not be compatible with life," one author grimly explained.

Video: How an Octopus Can See With Its Skin

Hermit crabs might have a shell to retreat to, but it's not enough to hide them from excess noise. As is the case with anyone dealing with acoustic intrusion, sudden, loud, sustained noise can be a distraction. Boat noise in particular seems to delay the response time that hermit crabs would ordinarily take to hide from predators,

according to a 2013 Biology Letters study

. In lieu of an actual predator, the researchers employed a black T-shirt and inflatable doughnut. Their improvised hunter was able to shrink the distance before the crab hid away in its shell by 25 percent when the animals were exposed to propeller noise. A faster, quieter predator might be able to take advantage of the longer reaction time.