A highly sensitive radio telescope has seen something peculiar in the depths of our cosmos: A group of supermassive black holes are mysteriously aligned, as if captured in a synchronized dance.

A highly sensitive radio telescope has seen something peculiar in the depths of our cosmos: A group of supermassive black holes are mysteriously aligned, as if captured in a synchronized dance.

These black holes, which occupy the centers of galaxies in a region of space called ELAIS-N1, appear to have no relation to one another, separated by millions of light-years. But after studying the radio waves generated by the twin jets blasting from the black holes' poles, astronomers using data from the Giant Metrewave Radio Telescope (GMRT) in India realized that all the jets were pointed in the same direction, like arrows on compasses all pointing "north."

Top 10 Astronomical Discoveries Of All Time

"Since these black holes don't know about each other, or have any way of exchanging information or influencing each other directly over such vast scales, this spin alignment must have occurred during the formation of the galaxies in the early universe," said Andrew Russ Taylor, director of the Inter-University Institute for Data Intensive Astronomy in Cape Town, South Africa. Taylor is lead author of the study published in the journal Monthly Notices of the Royal Astronomical Society.

In other words, though each of these galaxies are currently independent from one another, they likely originated from the same small-scale mass fluctuation, shortly after the Big Bang, and therefore used to have some commonality on a quantum scale. These objects were all spawned in the same compact region of primordial space some 13.8 billion years ago that, as the universe expanded, drifted apart into the mature galaxies we see today in that distant volume of space.

The researchers hope to use this surprising discovery to perhaps better understand the conditions in which they formed, but the discovery will be a huge challenge to explain as there's no cosmological model that can currently account for it.

"This is not obviously expected based on our current understanding of cosmology. It's a bizarre finding," said collaborator Romeel Dave, of the University of the Western Cape, South Africa.

Needless to say, the researchers have plenty of hypotheses about what influenced the primordial universe to produce such a fine-tuned group of black holes. Perhaps powerful magnetic fields influenced primordial matter in such a way to seed the group of synchronized black holes. Maybe the influence of a hypothetical dark matter particle (such as axions) had a role to play or cosmic strings might have somehow influenced their evolution. For now, it's anyone's guess.

ANALYSIS: Did Some Black Holes Survive the Big Bang?

Interestingly, the discovery of these aligned black holes came about by accident. In preparation for the completion of the South African MeerKAT radio telescope and Square Kilometre Array (SKA) - which is set to become the more powerful radio telescope on the planet - the researchers used the powerful GMRT to find the faintest radio signals possible so targets could be found for MeerKAT and SKA to further investigate. Both systems will be many times more powerful than the radio observatories we currently have available, so it looks like they already have a vexing puzzle to solve.

"We're beginning to understand how the large-scale structure of the universe came about, starting from the Big Bang and growing as a result of disturbances in the early universe, to what we have today," added Taylor, "and that helps us explore what the universe of tomorrow will be like."

Learn more about how the primordial universe shaped the large scale structure of our cosmos in my recent DNews video of giant galactic walls! 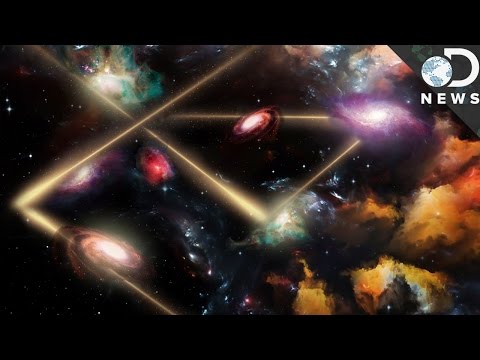 Image: The Hubble Space Telescope hangs above Earth in this photo taken by a NASA astronaut during one of the Hubble Servicing Missions.

Image: This famous observation of the Carina Nebula, located 7,500 light-years away in the southern constellation Carina, shows a beautiful and dramatic star-forming region. The image celebrated the 20th anniversary of Hubble's launch and deployment into an orbit around Earth in 2010.

Image: This observation by Hubble shows a new view of an old classic: The Horsehead Nebula.

Image: The dazzling Small Magellanic Cloud (SMC), one of the Milky Way's closest galactic neighbors, dazzles in this detailed observation by Hubble.

Image: A view of the Hubble Space Telescope orbiting over South America.

MORE: Hubble at 25: Brief History of the Hubble Space Telescope