This Bird Lives Nearly Its Entire Life in the Air

Sleek birds called common swifts are uncommonly good flyers, and have just broken the world's record for time spent each year in flight.

Streamlined birds known as common swifts have just broken the world's record for longest time spent airborne in nature without any support.

The birds spend at least 10 months out of every year in the air, according to new research that could inspire new unmanned aerial vehicle designs.

Previously it was known that frigate birds and alpine swifts remained in flight for periods of months. Scientists suspected that common swifts did this too, since no roost sites were ever found for the birds in their African wintering areas.

"Hence, there was a suspicion that this species may actually forego roosts involving landing and actually spend its nights in the airspace," Anders Hedenström of Lund University's Department of Biology told Seeker. Hedenström authored a study about the findings in Current Biology.

Hedenström and his team developed a new type of micro data logger to track the birds' movements. The little gadgets record acceleration to monitor the birds' flight activity, and also document geolocation via added light sensors.

The researchers attached the data loggers to 19 common swifts that were later recaptured. The data revealed that the birds spent more than 99 percent of their time during the 10-month non-breeding period in flight.

"A few individuals in our study literally never landed during this period," Hedenström said, adding that he thinks the birds somehow sleep in the air. How they may manage this, though, remains a mystery. 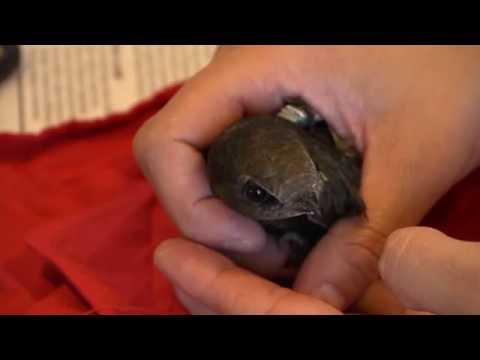 The loggers also showed that the birds' flight activity appeared lower during the day than at night, probably because they spend their days near-effortlessly soaring on warm air currents known as "thermals."

The common swifts ascend at dawn and dusk, reaching altitudes close to 10,000 feet. As they fly, they feast on any insects that they can capture.

Their life on land moves, as their name suggests, swiftly. The birds go to Sweden in late May/early June, where they breed and raise one to three chicks. Breeding normally takes place in natural tree holes, like those left behind by woodpeckers. But these days, the birds have been seen nesting in buildings and under roof tiles. Their chicks are fed "insect balls" that the adult birds store in a muscular pouch near their throat.

Here's what a typical flight plan looks like for the common swift: In the autumn, they travel via the Iberian Peninsula in West Africa and, from there, further east into the Congo Basin of Central Africa. This becomes part of their six-month wintering period.

RELATED: These Animals Can Sleep with an Eye Open

"Spring migration starts in April," he said, "when they again pass via West Africa, where they spend about 10 days in Liberia to fuel up, before the rapid spring migration across the Western Sahara and Europe to return back to their breeding site."

Given all of the birds' time in the air, they can't afford to shed many flight feathers. So they molt extremely slowly, replacing their feathers one by one over a six-month or so period to avoid any dangerous gaps. The prep seems to work, as the birds can live to advanced ages. Some have been documented as reaching 20 years old, and they can probably live even longer than that if a predator, such as falcon, doesn't grab them.

The rest of their body is a lean, mean natural flying machine. Their wings are long and narrow, their legs are short and lightweight (so not very good for walking around on land), and their entire frame has a streamlined shape.

WATCH VIDEO: How Can Birds Sleep While They're Flying?