From his birth last summer to his first steps, the world has watched with adoration as Bei Bei grows up before its very eyes.

With every passing day, the Internet seems to be falling even more in love with Bei Bei, a precious panda cub born recently at the Smithsonian's National Zoo in Washington, D.C. From his birth last summer to his first steps, the world has watched with adoration as Bei Bei grows up before its very eyes.

Now, Bei Bei how has yet another first to add to his quickly growing list. National Zoo keepers took to social media this afternoon to share footage of the young panda scaling a tree in his habitat for the first time ever - a feat that reportedly took multiple attempts: 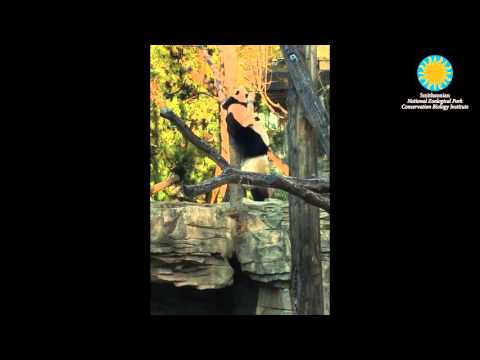 Born to mother Mei Xiang on August 22, 2015, Bei Bei is part of a program known as panda diplomacy, a cultural exchange practice dating back more than a thousand years in which the Chinese government extends giant pandas as diplomatic gifts.

The United States government pays approximately $500,000 each year to host China's iconic giant pandas in the Smithsonian, money which is then funneled back into panda research and conservation efforts in China.

The current Sino-American agreement was instituted at the turn of the millennium; once it expires, the pandas will return to China.

The baby giant panda at the Smithsonian's National Zoo now has a name: Bei Bei (BAY-BAY), which means "precious treasure," a nod to his sister's name, Bao Bao, which has the same meaning. Bei Bei has come a long way since he was born blind and deaf on Aug. 22. The images below show how the little panda has grown over the past month. [

] The panda cam shows his mother Mei Xiang (may-SHONG) and cub Bei Bei, side by side in the den at the National Zoo in Washington, D.C.

Bei Bei slept most of the day on Sept. 13, which is typical for young cubs. Keepers noticed that he sleeps with his paw covering his eyes — a position his father, Tian Tian (tee-YEN tee-YEN), and sister Bao Bao also prefer. Mei Xiang left her den four times that day, and ate a pear (one of her favorite foods) for the first time since giving birth.

When Mei Xiang left her den to eat and drink on Sept. 5, zoo staff members gently picked up Bei Bei to weigh him and give him a quickmedical checkup. They found that he weighed 14.4 ounces (409.6 grams). Veterinarians also listened to his heart and lungs, and said that both sounded normal.

Mei Xiang left the den again on Sept. 8, allowing zoo staff to weigh Bei Bei once more. He had already gained weight since his last checkup, pushing the scale to 1.3 pounds (601.8 g).

A veterinary exam on Sept. 17 showed that Bei Bei measured 12.2 inches (31 centimeters) from head to tail. His right front leg was 4 inches (10 cm), and his right hind leg was 3.5 inches (9 cm) long. The cub has an excellent range of motion, and can push up onto his front legs, zoo workers said. Zookeepers have seen him scooting around the den using his front legs, but he has yet to use all four to walk.

When he turned 4.5 weeks old on Sept. 21, Bei Bei weighed about 3 pounds (1.4 kg). He now weighs more than his older siblings, Bao Bao and Tai Shan, weighed when they were his age.

First ladies Michelle Obama of the United States and Peng Liyuan of the People's Republic of China, walked toward the panda habitat at Smithsonian's National Zoo for the panda's naming ceremony Saturday (Sept. 25).

This story originally appeared on