A circle of ice on North Dakota's Sheyenne River is a rare winter spectacle. Continue reading →

A rare sight to behold, this circle of ice on North Dakota's Sheyenne River is a winter spectacle that requires two ingredients to make: freezing cold air and an eddy in a not-so-freezing river. That and patience.

The circle of ice is a "collection of ice cubes," caught in an eddy, Allen Schlag, a National Weather Service hydrologist in Bismarck told the AP. The cold weather over the weekend froze bits of the river in other areas that then broke apart and drifted with the current until getting caught in the eddy. Snow and frost continue to collect on top of the eddy, which grows larger in a series of concentric rings.

Retired engineer George Loegering came across the spinning disk of ice while out hunting with relatives and calculated the ice circle's diameter to be about 55 feet. "At first I thought, no way! It was surreal," he told the AP. Then he looked up the phenomena online and found it is a relatively rare event.

"That might be one of the better examples I've seen," Schlag told the AP. "It's a pretty cool one." 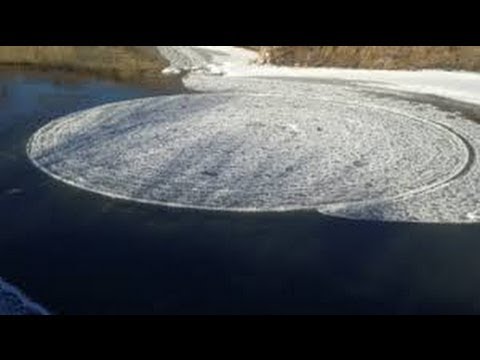 An ice fisher waits for a catch.