The young male is part of a multi-year program to revive the country's rhino population.

A baby rhino born in Nepal's Bardia National Park has given conservationists hope that efforts to rebuild the rhino population in the country are on the right track.

The baby, a male born on May 22, was born to one of the five rhinos that were relocated to Bardia at the beginning of March from Chitwan National Park in central Nepal. The move was part of an ongoing attempt to establish a second rhino population in the area encompassing northern Nepal's Bardia and the Shuklaphanta Wildlife Reserve.

RELATED: What Does It Take to Move 5 Rhinos?

"The newborn rhino is a signal of hope and an inspiration for Nepal's rhino conservation efforts," said Anil Manandhar, of WWF Nepal, in a statement released by the organization. "It is encouraging to see all the five translocated rhinos and the newborn adapt well in their new home in Babai Valley, which once lost its entire rhino population to poaching."

Plans are for the relocation effort to run until 2018. The goal, ultimately, is to resettle 30 rhinos in Bardia and the Shuklaphanta reserve from their present home in Chitwan National Park. That will do two things: Replenish the former two regions' rhino populations and also ease those of Chitwan, which is at capacity for the animal.

Local wildlife officials, along with WWF Nepal, the National Trust for Nature Conservation, the Nepal army, and local community leaders have spearheaded the project.

If you're curious just what it takes to transport a rhino, you can read more about it here, and watch the video below:

WATCH VIDEO: "Rhinos on the Move" 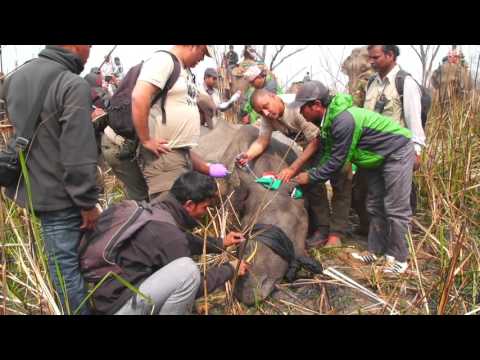