Macaques Grin in Sleep, Push Back Origin of Smiles

Baby macaques have been caught smiling for no good reason, even in their sleep, which means monkeys can join the small club of documented so-called "spontaneous smilers."

RELATED: Chimps Chuckle, Smile Much Like Humans Do: Photos

Spontaneous smiles in infants – facial movements that frequently happen during sleep and have no discernible cause, internally or externally – have, of course, been seen in humans and also, more recently, in chimpanzees.

"About a decade ago we found that chimp infants also display spontaneous smiles," said study co-author Masaki Tomonaga in a statement. "Since we see the same behavior in more distant relatives, we can infer that the origin of smiles goes back at least 30 million years, when old world monkeys and our direct ancestors diverged." 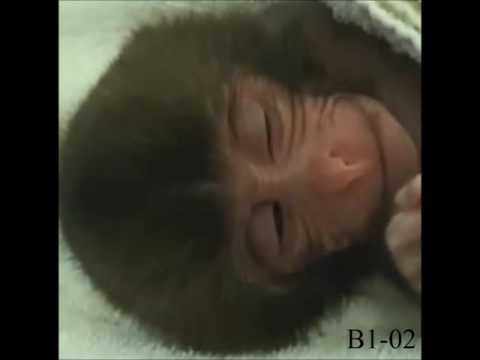 The study's lead author, Fumito Kawakami, noticed macaque newborns smiling during health exams, and that prompted a closer look at the behavior, culminating in a study just published in the journal Primates.

As can be seen in the video, the word "smiling" is used broadly, when compared with the everyday impression of what constitutes, say, a human smile.

What's going on with the macaque smiling? The researchers say the smiles are more akin to grimaces than expressions of pleasure. The facial movements, they suggest, may be an aid to development of cheek muscles that will let them smile, laugh and, yes, grimace – just like people and monkeys.

Tomonaga suggested that infant chimps, humans and monkeys may not be the only spontaneous smilers: "There are case reports about mice laughing when they get tickled and dogs displaying facial expressions of pleasure. It may be the case that many mammal infants display spontaneous smiles, in which case smiling would have an older evolutionary origin. Who knows?"