A baby western lowland gorilla is "doing well" after being born in an extremely rare C-section operation, Bristol Zoo said on Tuesday.

Officials at the U.K. zoo requested the help of gynecologist David Cahill, when the mother gorilla, Kera, showed signs of the potentially life-threatening pre-eclampsia.

The 11-day-old infant, a girl, weighed only 2lbs 10oz at birth and initially needed help, including mouth-to-mouth, to breathe on her own. Currently the young, yet-unnamed gorilla is being hand-reared round the clock by a small team of gorilla keepers. 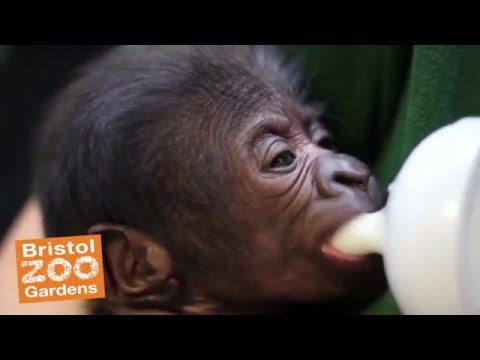 "The first few days were critical for the baby, it was vital that she was kept warm and began taking small amounts of formula milk. We started ‘skin-to-skin' contact – a process used with human newborn babies – and she responded well to this and is getting stronger and more alert each day," said curator of mammals, Lynsey Bugg in a statement.

The mother is reported as "recovering" and is also being closely monitored.

This marks the first time a gorilla has been born by cesarean at the Bristol Zoo and is among only a handful of such births worldwide, according to a release from the University of Bristol.

Koko the Gorilla Still a Wonder at 44

"The birth of any gorilla is a rare and exciting event; but the birth of a baby gorilla by cesarean section is even more unusual. It wasn't a decision that we took lightly – Kera was becoming quite poorly and we needed to act fast in order to give the best possible treatment to mother and baby, and to avoid the possibility of losing the baby," said Birstol Zoo's senior curator of animals, John Partridge, in a press release.

Dr. Cahill, a Professor in Reproductive Medicine and Medical Education at the University of Bristol's School of Clinical Sciences and gynecologist in St Michael's Hospital, had delivered hundreds of human babies by C-section throughout his career - but this was his first baby gorilla delivery by the method.

"Along with having my own children, this is probably one of the biggest achievements of my life and something I will certainly never forget," Cahill said in a statement. "I have since been back to visit Kera and the baby gorilla, it was wonderful to see them both doing so well."

-- This year, a study published in the journal PLoS found that looking at cute animal photos helps people to improve their concentration. With that in mind, we present some of the cutest baby animal photographs of 2012. Taking a break to look at such photos may provide a beneficial boost. "For future applications, cute objects may be used as an emotion elicitor to induce careful behavioral tendencies in specific situations, such as driving and office work," wrote Hiroshi Nittono of Hiroshima University and his colleagues. Some of our favorite cute critter photographs this year came from the Chengdu Panda Base, which experienced a giant panda baby boom in 2012. Alejandro Grau, a spokesperson for the reserve, told Discovery News in November that "all the cubs are in good health and were photographed together for the first time."

When this little female orange-headed Francois's langur was born at the San Francisco Zoo, the SF Giants baseball team went on a winning streak. "Things have turned literally since she's been born" Abigail Tuller, a spokesperson for the zoo, said in October. "She seems to have her strongest powers when the Giants are behind." That winning streak never ended. The Giants wound up winning the World Series pennant.

Two-month-old Charlees, the rhino, spent an entire sunny morning happily running around her spacious digs at the San Diego Zoo Safari Park. Charlees is the 61st greater one-horned rhino born at the Safari Park since 1975, making the Park the foremost breeding facility in the world for this species. Once widespread in Southeast Asia, the greater one-horned rhinoceros now numbers approximately 2,800 and is listed as an endangered species by the International Union for Conservation of Nature.

This clouded leopard cub and his brother were born this year in Nashville, Tenn., but traveled to the San Diego Zoo, which they now call home. The brothers, Riki-san and Haui-san, provide hope that breeding programs can successfully increase numbers of their critically endangered species.

NEWS: Why the Leopard Got Its Spots

During spring 2012, Smithsonian's National Zoo welcomed the birth of this young black howler monkey. In the wild, threats to these monkeys include human predation, habitat destruction and being captured for captivity as pets -- since they are so cute.

In April, a duckling whose mother was mauled to death by a fox was adopted by a Labrador retriever. Jeremy Goldsmith, owner of Fred the lab, said, "It is amazing to see the two of them together. When we found Dennis (the name he gave the duck) he was quite frail, and he clearly would not have survived another day on his own." He continued, "Fred, who has always been extremely loving, went straight up to him and began to lick the little bird clean. Since then, Dennis has not stopped following him around, and Fred has pretty much adopted him."

Even killer whales have their cute moments, as this photo of a mother and son together proves. This year, we learned that the prolonged life spans of killer whale moms and human mothers is due, in part, to caring for offspring -- especially sons. "For most animal species, the potential for an individual to increase the propagation of its genes stops when they stop reproducing," Darren Croft, a senior lecturer in animal behavior at the University of Exeter, told Discovery News. "Our results show that, as with humans, female killer whales can continue to increase the propagation of their genes long after menopause." He added, "They do this by helping to increase the survival of their older sons, which in turn increases the number of grandchildren fathered by their sons. Through this process, evolution favors females that live longer after their menopause."

Yet another mother and baby, this time orangutans, were captured in a photo this year. As for killer whales (also known as orcas), orangutan mothers dote over their offspring.

In May, a fishing cat mother gave birth to a pair of kittens. Fishing cats in the wild are endangered and are native to South and Southeast Asia. The cats live near water, such as freshwater marshes and rivers.

This baby dama gazelle, which entered the world in 2012, has evolved for life in the desert. As adults, dama gazelles grow incredibly long legs and can run very fast. They also sport thick horns. Their diet includes grasses, leaves, shoots and fruits.

This young Savannah sparrow, snapped in 2012, has a short tail and a tiny head. It is a common songbird in North America, where it can be heard in farm fields and grasslands tweeting a loud, insect-sounding song.

While snakes seem to have faces that only a mother could love, this baby tentacled snake was a hit at Smithsonian’s National Zoo. Aside from their diminutive size and slithery cuteness, the snakes charmed zookeepers because the keepers had spent four years trying to breed this rare species. Tentacled snakes are native to Southeast Asian lakes and rice paddies.

In November, a study in the journal PLoS ONE reported that grey seal moms often exhibit a flexible parenting style. Sean Twiss of Durham University, who worked on the study, said, "In either resting or disturbed situations, seal mums behaved in very individual ways, some showing high levels of maternal attentiveness, others showing low levels." Surely this mother, caught playing with her pup, falls into the doting mom category.

A plethora of great giant panda pics came our way in 2012. We already have shown you one, but could not resist yet another. Here, giant panda cub Xiao Liwu (meaning "Little Gift") stretches out and shows his belly while animal care staff check him over during an exam at the San Diego Zoo.

Baby animals likely have been cute since the beginning of critter time on this planet. Cuteness makes them more appealing to adults, helping to ensure their care. We cannot show you a photo of a baby dinosaur, but we can show you this handprint of the baby dinosaur Massospondylus rom a nesting site in South Africa. This handprint reveals that the hatchlings walked on all fours, whereas adult dinos were known to walk on two legs. Our guess is that baby Massospondylus was extremely cute, at least by Jurassic standards.