Where DO baby planets come from? Well, this observation of a young star sporting a ringed protoplanetary disk holds the answer.

Where DO baby planets come from? Well, this observation of a young sun-like star sporting a ringed protoplanetary disk holds the answer.

This beautiful image captured by the powerful Atacama Large Millimeter/submillimeter Aray (ALMA) in Chile shows the disk of gas and dust surrounding the 10 million year-old star TW Hydrae, which is located nearby - only 175 light-years from Earth. We are basically looking at the star system's orbital plane face-on - it's about this plane that any future planets will orbit their star.

PHOTOS: The Most Mind-Blowing Space Spirals

And it looks like baby planets are forming within those dark gaps; their gravity is sweeping up the dust that was left over after TW Hydrae was formed.

"Previous studies with optical and radio telescopes confirm that TW Hydrae hosts a prominent disc with features that strongly suggest planets are beginning to coalesce," said Sean Andrews with the Harvard-Smithsonian Center for Astrophysics in Cambridge, Mass., and lead author of the study published in the Astrophysical Journal Letters.

Observations of young star systems such as TW Hydrae act as time capsules to our solar system's past. This is how our "proto"-solar system would have likely looked to an alien observer around 4.5 billion years ago.

By measuring the distance of the dust gaps from the central star, astronomers have realized there are likely planets forming 20 and 40 AU from the star, which happens to be the approximate orbital distances of Uranus and Pluto from the sun, respectively. But there's also a gap close to the star that looks very familiar.

"The new ALMA images show the disc in unprecedented detail, revealing a series of concentric dusty bright rings and dark gaps, including intriguing features that may indicate that a planet with an Earth-like orbit is forming there," said Andrews.

Planetary formation models make logical sense. After a star has formed and started nuclear fusion in its core, the left-over gas and dust from the molecular cloud it was born from begins to coalesce as a dusty spinning disk around the young star. As the disk cools, material starts to clump together. Dusty clumps grow into rocky planetesimals that sweep up more dust and debris to form protoplanets. Over millions to billions of years these evolve into planets.

From an observer's perspective, the clumping material will carve out gaps in the protoplanetary disk, forming a pattern as can be seen in this stunning ALMA observation.

To get a closer look at TW Hydrae's innermost dust gap, ALMA's observing power was boosted by putting it into its high-resolution, long-baseline configuration. The array is composed of 66 radio antennae, so when they are at maximum separation (thereby increasing the observatory's baseline), they are separated by 15 kilometers (over 9 miles). This allows the system to boost its sensitivity to see extremely fine detail in the center of the star system, giving us an unprecedented look into a protoplanetary gap only 1 AU from the star - an orbit identical to Earth's orbital distance from the sun.

ALMA image of the planet-forming disc around the young, sun-like star TW Hydrae. The inset image (lower right) zooms in on the gap nearest to the star, which is at the same distance as the Earth is from the sun, suggesting an infant version of our home planet could be emerging from the dust and gas. The additional concentric light and dark features represent other planet-forming regions farther out in the disk. | S. Andrews (Harvard-Smithsonian CfA); B. Saxton (NRAO/AUI/NSF); ALMA (ESO/NAOJ/NRAO)

"This is the highest spatial resolution image ever of a protoplanetary disc from ALMA, and that won't be easily beaten in the future!" Andrews added.

This mind-blowing observation comes only weeks after The Very Large Array in New Mexico released detailed images of a clump of material forming in a protoplanetary gap carved out in the disk surrounding the 1 million year-old star HL Tauri. HL Tauri has also been studied by ALMA and its 2014 observations were hailed as "revolutionary" by astronomers as it was the first time evidence for the formation of baby planets had been directly seen.

However, these new observations of TW Hydrae could be considered to be even more revolutionary as this star is much closer to Earth, allowing us to see more detail in its baby planet crib.

Now astronomers hope to compare both stars' protoplanetary gaps to see how worlds are born around stars in their formative years. And we are extremely lucky to have HL Tauri and TW Hydrae, two stars only 1 million and 10 million years old, to help us piece together the early evolution of planets. In doing so, we can embark on a profound voyage of discovery as to how our solar system evolved 4.5 billion years ago.

Want to know more about where baby planets come from? Check out my most recent DNews video about HL Tauri and some planetary birthing weirdness: 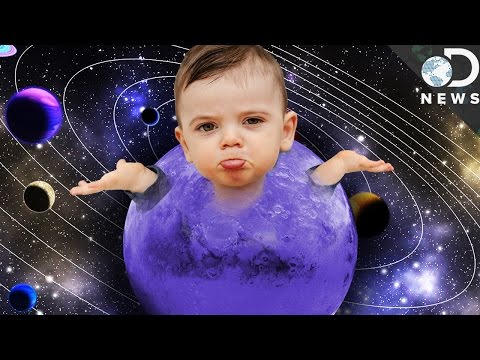