Staff at Chicago’s Shedd Aquarium got a rare, thrilling, up-close look at the birth of a Pacific white-sided dolphin.

Staff at Chicago's Shedd Aquarium got a thrilling, up-close look at a baby dolphin's birth, and it was all caught on video.

The mom is Pacific white-sided dolphin Katrl, who gave birth in the early morning hours on Monday April 18. As though she knew she had an appreciative audience, Katrl gave staff members great looks at the birth, from first fin-sighting until the little newbie finally emerged.

As shown in the video below, Katrl drifted to and fro in the water, sometimes wriggling and scrunching her middle to speed the process along. 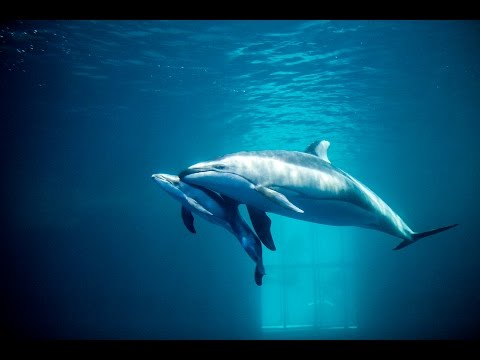 Thus far, both mother and calf appear healthy, according to the aquarium.

"To watch a dolphin be born is beautiful," said Llisa Takaki, senior director of marine mammals at the aquarium, in a statement on Shedd Aquarium's blog. "But to also see its natural instincts fully take over in a matter of seconds as it kicks its tail to propel its little body to the surface to take its first breath is overwhelmingly emotional."

The baby measures about 3 feet long and weighs 25 pounds.

VIDEO: Dolphins Give Each Other Unique Names

Going forward, the byword is caution.

"We're watching both animals carefully and recording their behaviors minute by minute to ensure their progress aligns with what we have seen in other successful calf births at Shedd," Takaki said.

This latest birth makes it three successful dolphin births at the aquarium and brings to 16 the count of Pacific white-sided dolphins living at aquariums in North America.

"Pacific white-sided dolphin births have never been seen in the wild," offered Shedd President and CEO Bridget Coughlin, "so it's a unique opportunity for Shedd to deepen our scientific knowledge of this species."

Barnacles, lice and other creatures live their lives attached to the bodies of dolphins, whales and other marine species, and a new study reveals just how rewarding that choice of "real estate" can be. Some of these freeloaders exclusively attach to certain parts of marine mammals, creating their own microhabitats right on their unsuspecting hosts. Here, barnacles from the species

hang from the underside of a dolphin fin. The barnacles are filtering organisms, trapping food particles in water as the bits of food flow by, according to Francisco Javier Aznar, senior author of the study, published in the journal PLOS ONE. "Some years ago, a colleague wrote rather poetically that riding a dolphin would be the dream of a barnacle for two reasons," Aznar, who is a researcher at the University of Valencia's Cavanilles Institute of Biodiversity and Evolutionary Biology,said. "First, the movement of water the dolphin produces around it during swimming is rather predictable and, therefore, can advantageously be used by barnacles...Second, no predator can chase a fast dolphin to feed on their barnacles!"

Most barnacles use a special substance to essentially glue themselves to things, such as rocky coasts, boats and flotsam. The glue, Azar said, has "extraordinary mechanical properties," so engineers continue to study it in hopes of recreating a similar compound for human use. The various barnacle species that live on marine mammals, on the other hand, have evolved ways of attaching to skin. "Cetacean skin is constantly shedding and, therefore, no glue would work properly on skin as the barnacle would be readily detached, along with the superficial skin, in a matter of hours," Aznar explained. As a result, these barnacles use shells that elsewhere function as protection, in order to penetrate deep into the marine mammal's skin. Aznar added, "This is indeed an evolutionary novelty in the world of barnacles."

The Record-Breaking Sex Lives of Barnacles

The barnacles living on marine mammals and other marine life (such as sharks) do not seem to cause much, if any, harm. The jury is still out as to how much the marine mammal hosts feel the presence of the barnacles. Aznar said that an anecdotal story some years ago suggested that the barnacles produce itchy sensations on dolphins and whales, such that dolphins -- with nothing to scratch against -- "sometimes jump out of the water and splash to essentially scratch themselves." "As far as I know," he added, "this story has never been substantiated by solid data. In any event, no one knows whether barnacles can produce itch."

Barnacles usually are not alone on marine mammals. This image shows both barnacles and lice atop a grey whale. Some barnacles prefer to be on top of the whale's head, while others prefer different locations. Once attached, they literally go with the flow and filter feed as the whale moves. The slightly pink coloration around the barnacles indicates the presence of whale lice. They feed on dead skin and clean wounds that might afflict their whale host, so their presence in reasonable numbers seems to benefit their hosts.

When Lice Move In: What to Do

Whale lice are members of the family Cyamidae. They take on a pink (per the prior image) or orange color, as seen here. The color comes from algae, which tend to settle on the host's body. The lice then eat the algae, along with the previously mentioned shed skin and other things. In large numbers, the lice can cause minor skin damage, but there are no reports that they have caused significant harm to their hosts. In fact, most species of whale lice are associated with a single species of whale, with the two benefiting each other over the millennia.

Aznar said that whale lice "resemble human lice in that they require physical host contact for transmission and they use their clawed legs to attach." He continued, "Whale lice grab folds of skin in the blowhole, the eyes, or the genital slit." It could be that, before modern bathing, lice benefited our early human ancestors too, by eating dead skin, cleaning wounds and more. Now, of course, human lice are considered a nuisance, with treatments available to get rid of them.

While lice can benefit their marine mammals hosts, Aznar said, "As far as we know, marine mammals get no benefit from having barnacles." The barnacles could, however, benefit lice, sometimes providing buffers around them and attracting algae. An entire little ecosystem consisting of multiple species could therefore be living on this Southern right whale's head.

Barnacles and lice are just two types of creatures that may live on whales, dolphins and other marine life. There are also small aquatic crustaceans from the genus Pennella. Aznar said they resemble the cartoon character "

," the archrival of SpongeBob Squarepants in the popular series for kids. Yet another small aquatic crustacean, called

, lives on the baleens of whales. Baleens are fibrous structures in the mouths of some whales that enable them to filter feed. Another research team found that the tiny freeloading crustaceans primarily eat keratin, which is the protein that makes up the baleens. This is the same protein found in human hair and fingernails, as well as in the feathers, hoofs, claws and horns of other animals.

Remoras, such as the one shown here, are slender marine fish that feed on remnants of the meals of others, as well as on parasites, such as the aforementioned whale lice. These fish, as well as lampreys, "have sometimes been reported attached to dolphins and whales," Aznar said.

If humans were aquatic animals, we would find ourselves serving as hosts for all sorts of tiny marine species too. This remora attached itself to a scuba diver's leg, even though the diver was only in the water for a relatively short period. There is still much to learn about such clingy fish, not to mention the barnacles, whale lice and additional creatures that settle on dolphins, whales and other marine life. Aznar said that research on such small species is challenging, given that the work "must rely on opportunistic sampling." For example, the single recent study on the barnacle

took over 25 years. That's because the researchers needed to get a sample size of stranded dolphins large enough to yield findings concerning the lives of these well-traveled barnacles.