The discovery should help scientists understand the life cycle of stars.

The shockwave generated by the explosion of an ageing giant star has been observed by an international team of astronomers.

The discovery, accepted for publishing in the Astrophysical Journal, will help scientists understand the life cycle of stars, said study co-author Brad Tucker of the Australian National University.

"This is the first time we've seen this in the normal visible colours, and we now know it happens," Dr Tucker said.

"The fundamental way we believe that core collapse happens is related to this shockwave happening. So the physics has been around ... for decades and we've finally now been able to physically examine and test what's going on."

They spotted the shockwave around the smaller of the two stars - a red supergiant over 270 times the radius of the Sun and 750 million light years away.

As the star ran out of fuel it began collapsing and compressing on its central core.

"It's like packing in dirt," Dr Tucker said. "You keep pressing it till it's so dense you can't get it in anymore, and that's when you create a neutron star.

"But you reach a limit when you can't pack it in anymore, and that force pushing in bounces back and it triggers a shockwave to go through the star, causing the star to actually blow up."

That's the moment the supernova starts creating the heavier elements on the periodic table, such as gold, silver and platinum.

"It's that singular moment when we can see the periodic table happening, when we can see the process of creating these new elements, and also see a switch from fission to fusion all at the same time because of this residual shockwave going through this star," Dr Tucker said.

What Makes A Supernova Blow?

The shockwave that initiated the core collapse or type IIp supernova was seen as a quick brightening - or flash. The supernova itself also creates a brightening, but this fades over a longer period of time.

Because the shockwave doesn't last very long - typically hours to days - it's been a challenge to catch one.

Scientists have previously observed a shockwave in X-ray (as opposed to visible light) but that was just pure luck, Dr Tucker said.

"They were actually looking at another exploding star and one happened to go right off in the exact patch of sky in the exact moment they were looking at it. It was the definition of luck." 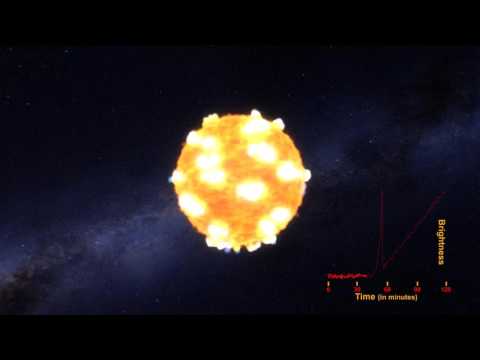 The Kepler Space Telescope enabled the astronomers to systematically scan the sky.

"Kepler is unique," Dr Tucker said, "because it's in space and the way it's set up, you can monitor the sky every 30 minutes. So you know that once the star blows up, you catch it within 30 minutes."

The second exploding red giant they observed, however, did not shows signs of a shockwave.

This Supernova Remnant Cranks Up The Heat

The researchers suggested this was because the huge size of the second star - with a radius of 400 times our Sun - made it hard for the shockwave to get through the star to escape out into space.

"Because it had to travel twice the distance [of the other shockwave] we believe it happened but it never made it outside the surface of the star and we never saw it," Dr Tucker said.

The exploding red giants were found in the first Kepler space observatory mission, known as K1. Four other supernovae have been found in this mission - three previously discovered were caused by the collision of pairs of very old, dense stars called white dwarfs - and another star is yet to be analysed.

The second Kepler mission - known as K2 - began in 2014 following repairs to the space telescope, and has so far discovered nearly 20 supernovae, which are yet to be analysed.

"With the original Kepler mission we did 500 galaxies and we got six supernovae," Dr Tucker said.

The research is reported on the pre-press site arXiv.org.

A shockwave has been measured coming from a supernova similar to this one.

This month marks the 15th year that NASA's awe-inspiring Chandra X-ray Space Telescope has been observing high-energy phenomena in the cosmos. With its X-ray vision, the orbiting telescope has brought us some of the most mind-blowing views of supernova remnants -- the glowing embers of stars that have (in cosmic timescales) recently exploded, spewing out hot gas and dust. Shock waves traveling millions of miles an hour can still be observed ripping through these interstellar clouds. Chandra's contribution to our understanding of the aftermath of a star's life has been nothing short of revolutionary, so to celebrate its 15 years in space,

NASA has released newly-processed images of four of Chandra's most famous supernova remnants.

Shown here is perhaps the most famous remnant of all. First observed by Danish astronomer Tycho Brahe over 400 years ago, this beautifully symmetric expanding cloud is a perfect example of a supernova remnant in action. Powerful shock waves can be seen within the supersonic gases traveling outward and inward, energizing the stellar material as it goes. The blue outer shell of X-ray emissions is caused by these outward-propagating shock waves accelerating electrons, whereas the red and green emissions are energized gases accelerated by the inwardly propagating shocks.

This eerie supernova remnant was spawned in 1181 AD by a supernova observed by Chinese and Japanese astronomers. By zooming in on the central region of the remaining cloud of debris, Chandra has been able to resolve the impact of the rapidly spinning neutron star that can be seen in its core. A torus of X-ray-generating material can be seen. X-ray jets can be seen accelerating away from the neutron star to the left and right. This turbulent mess of high-energy gases, shocks and powerful magnetic fields has generated X-ray emissions across the energy spectrum. High-energy X-rays are the bright blue regions; the redder regions are lower energy X-rays.

As with 3C58, the Crab Nebula also has a spinning neutron star in its core and Chandra has gotten up-close and personal with this stellar corpse. Created from super-dense material that has collapsed in on itself after the supernova explosion, neutron stars retain much of the original star's spin -- but as the neutron star is only a few miles wide, the smaller object spins much faster, often many times per second. If the conditions are right, the neutron star can generate bright X-ray and radio emissions, becoming a pulsar. In the center of the Crab Nebula is a very well-known pulsar that sports an energetic ring of material and impressive jets spouting from its poles. The exploding star that generated this pulsar and remnant exploded in 1054 AD and was recorded by Chinese astronomers.

The supernova remnant G292.0+1.8 is of particular interest to astronomers. One of only three remnants in our galaxy known to contain large quantities of oxygen, G292.0+1.8 is a source of elements heavier than hydrogen and helium. The high metalicity of debris clouds like these form the basis of metal-rich stars, planets and complex chemistry that forms the basis for life.

For more on these X-ray observations and details about the Chandra mission, browse the NASA news release.