The research could help predict extreme ocean events and also improve the design of safer ships and offshore rigs.

The monster wave rises up out of nowhere and towers over the ship like a multi-story building before smashing into the deck at an unexpected angle. These rogue waves, also called freak waves, can send crew members overboard and even sink ships outright.

A hydrodynamics researcher in Finland recently reported that he had successfully recreated the potentially deadly phenomenon in realistic ocean-like conditions.

The effort was led by Aalto University assistant professor of hydrodynamics Amin Chabchoub. Previously, he and his team had only created rogue waves when lab conditions were perfect, which isn't really what happens out in the ocean. Recently, however, Chabchoub developed a new model for the dynamics of unstable waves that turn into rogue ones and then validated it in a water wave tank.

Now, realistic freak waves can be generated and controlled on demand in the lab. "This will help us not only to predict oceanic extreme events, but also in the design of safer ships and offshore rigs," Chabchoub said in a university press release. The research was published in the journal Physical Review Letters (abstract).

Chabchoub envisions that vessels and rig model prototypes will be tested against extreme ocean waves on a small scale before full-sized versions get built. Any scale models that fail could be reworked until the design finally keeps them afloat, potentially saving money and lives.

The Aalto University video demonstration shows a little plastic captain in his own tiny cannon boat. As his boat gets hit by regular waves in the lab, suspenseful music builds. Then, all of a sudden, we see the rogue wave rise up behind him. Watch out! Hang on! But it's too late. Down he goes.

That intense score juxtaposed with the toy boat did make me chuckle, but real oceanic rogue waves are no joke. As a "Deadliest Catch" fan, I've seen clips of freak waves hitting ships in the fleet many times. One particularly hairy incident happened in Season 5, when a wave slammed the Wizard out of the blue while crew members were working on the bow (video). If the lab-generated waves lead to safer, more resilient boats, I'm all for it.

Here's another heart-stopping example of what we're up against: 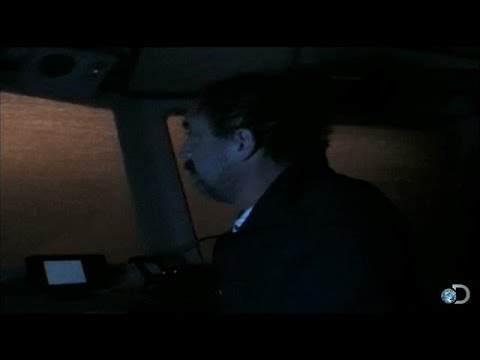