The first behavioral intelligence-based smart collar for canines, nicknamed the "Apple Watch for Dogs" since it pairs with iPhones, was just released this week at Indiegogo.

The device, SensDog, was developed by a team that includes some of the world's leading dog experts. Its primary innovation is that it measures and recognizes specific dog moods and behaviors - sitting, eating, running, walking, etc. - as opposed to just notifying an owner of their pet's location.

RELATED: Dogs Remember Even the Stupid Things We Do

The device periodically transmits information to the dog owner's iPhone, depending on the situation.

"This could mean information about the dog's stress, fear, injury or any extreme behavior, or positive things like needing to go out for a walk, or that it's time to eat," co-developer Ádám Miklósi, who is the head of the Department of Ethology at Eötvös Loránd University, told Seeker. 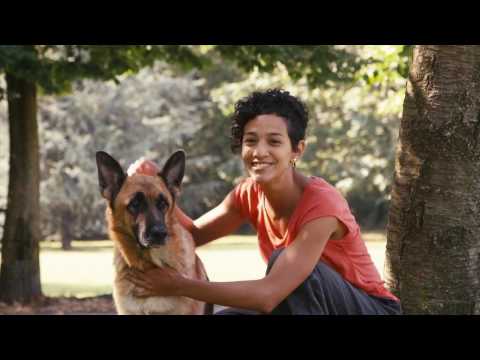 He explained that the device consists of a specially made Apple Watch encased in a small waterproof box worn around the dog's neck. The watch is outfitted with multiple body motion sensors that measure acceleration and speed of turning. This and other data is beamed to the SensDog lab, where it is processed by software that matches the movements to known dog behaviors and corresponding emotions.

The software also tracks the individual dog to determine behavioral patterns. These can then be compared to that of similar breeds over a period of days, weeks or months.

Miklósi shared some specific examples on how owners in tests have used the device. In one instance, a dog digs up plants or chases other animals around the house when the owner is not home. SensDog notifies the owner, who then remotely communicates with the dog through the device to either scold it or calm him down. (Sounds and lights on SensDog can also be activated, depending on the model.)

SensDog can additionally warn owners, he said, "if the dog is afraid of another individual, such as a kid or dog, or if there is something stressful like a thunderstorm, fire or even an earthquake."

Since the device captures data about all dogs wearing the high-tech collar, it initiates a worldwide, crowdsourced study on canines across the entire planet. Gathered information will be used to improve SensDog and to learn more about dog emotions, health issues and behaviors.

There are a few potential problems to consider. While SensDog is water and shock proof, its battery life is 16–36 hours, depending on operation. As for all portable electronic gadgets, recharging is needed.

Collars in general can lead to problems, such as constricting the animal's neck if too snug, or catching on things if too loose. It could also be a bit large for very small dogs, such as toy breeds. Some people with small wrists have had similar problems wearing the Apple Watch.

Ongoing exposure to radiation, a worry for humans, could now apply to dogs, especially since the device is worn so close to the canine's head. Miklósi, however, said that such potential health risks were addressed in the design, which is "why we eliminated the GSM technology. Technically it uses Bluetooth and WiFi on the collar, but even this usage is limited with very low energetic impact."

Dogs are not the only animals that will soon be monitored via such sophisticated scaled-down tech. An even smaller version is in development for felines, SensCat.

"SensDog also works with wolves in captivity," Miklósi said, "so we believe that there is immense potential to develop this system for different animal species."

Photo: Dog wearing SensDog, which works with iPhones and is the first behavioral intelligence-based smart collar.