Ants not only box, but some can deliver over 40 blows per second, new slow motion video shows.

Some ants box, hitting their opponents at a blazing fast rate of nearly 42 strikes per second, new slow-motion video reveals.

The Florida-dwelling trap-jaw ant Odontomachus brunneus appears to have set a world record, becoming the fastest known boxer on the planet.

Trap-jaw ants are carnivores with razor sharp, large mandibles that can lock back at 180 degrees. 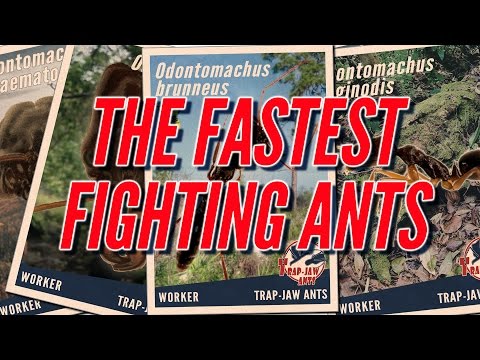 "Describing how fast multiple species box each other helps us understand how this behavior evolves," co-author Adrian Smith of North Carolina State University said in a press release. "For instance, we found that when one species uses boxing as a form of aggression, the behavior is indistinguishable from boxing as a social dominance interaction between colony members."

Worker ants are usually the ones in these antennal boxing bouts. The fighting determines which ant has to stay in the nest and which gets to go out into the world to forage.

"All social animals exhibit dominance behaviors of one kind or another," said entomologist Andrew Suarez, a professor of entomology at the University of Illinois and head of the university's Department of Animal Biology. "In the case of social insects, we often focus on their chemical communication system, but in these ants the antennal boxing was too remarkable to ignore."

The researchers used high-speed cameras to record antennae-boxing matches in four species of trap-jaw ants. Then they counted how rapidly each species pummeled their opponents.

Ants Enslave Each Other

The authors want to better determine why social organisms like trap-jaw ants use antennal boxing and other aggressive behaviors to organize their societies.

Real-life ants have powers beyond Hank Pym’s super-strength. They also float on water, build massive skyscrapers, dig crazy underground tunnels and will attack much larger creatures in huge numbers using massive jaws. With a nod to Marvel’s new film “Ant-Man,” here’s a look at some unusual abilities of our formic friends.

Watch This Video: Ant Bathroom Habits Go Under the Microscope

Ants are nature’s excavators. They move pebbles, rocks and bits of soil in all kinds of conditions to help the colony survive, often one holding onto another like a tiny ant jackhammers. “If you put a fire ant in soil, it will begin to dig,” said Dan Goldman, physics professor at Georgia Tech who studies how animals build and move. “They do it over and over in any soil. They use their mandibles, limbs and antenna to shape and create these snowballs and move them thousands of body lengths onto the surface to create the mound.”

There is no fiercer predator than tens of thousands of army ants pouring across the jungle floor in search of hapless prey. These ants are among the largest species, and are either blind or have almost no eyesight. Yet they can still scour the forest floor for insects, small birds or, on occasion, unwary villagers. “They are the pack hunters of the tropics,” says Sean Brady, chair of the department of entomology at the Smithsonian Institution’s National Museum of Natural History in Washington.

More Than 300 Spiders Pretend to Be Ants

Ants build the equivalent of human skyscrapers with no blueprints and nobody telling them what to do. “Every construction worker is lifting their own stuff, all milling around, banging around in the complete dark relentlessly day in and day out,” said Georgia Tech’s Goldman.

Ants don’t vocalize, but they still talk amongst themselves, using their antennae. They also secrete chemicals called pheromones to either warn the colony of an attack, or to lay a trail to food for others to follow. “It’s all chemical and tactical,” says the Smithsonian’s Brady. “What they are saying to each other and how they figure out where to go, we don’t understand that yet.”

New Ant Species Hides in Plain Sight Like a Spy

When Hurricane Katrina swamped much of the Gulf Coast, local residents not only had to worry about finding clean water or shelter, they also had to avoid bumping into huge floating mats of living fire ants.

Ants have big chompers. The bullet ant is so named because its bite feels like getting shot. The trap-jaw ant has such a powerful bite that researchers have watched them get pushed backward when chomping onto a hard surface, such as a wall or glass.

Some ants have evolved a cooperative existence with other insects, such as aphids or scales. The ants watch over these plant-sucking critters, keeping predators away, while the aphids provide ants with a sweet liquid called honeydew. Beats getting in fights all the time.

When ants have to cross an obstacle, they build a living bridge, gripping each other to let the others crawl across. “A bridge may be several ant lengths long and they will be that way for hours,” said Michael Goodisman, associate professor of biology at Georgia Tech who also worked as a consultant on the new “Ant-Man” film. “Imagine a human chain would last a minute. They can hold onto each other and support many ants themselves.”

Photos: Animal Superpower -- The Eyes Have It

Even though each ant has its own role -- worker, drone, soldier and queen, they behave more like one big insect with the goal of keeping the colony alive, well-fed and reproducing. “Ants have the most sophisticated social characteristic of any animals,” Goodisman said. “They need each other. They cannot survive on their own. It has to be associated with a colony to transfer its fitness to future generations. Ant colonies act as super-organisms.” This hive behavior was exploited in H.G. Wells' "Empire of the Ant," made into

Most male ants are pretty useless -- they exist to mate (then quickly die) and take part in few defensive or care-taking roles, experts say. But male army ants do get to fly around. In fact, they are so big that call them “sausage flies.”