Orbital ATK plans to resume space station cargo runs with its own rocket following a catastrophic explosion seconds after liftoff 19 months ago.

One of NASA's two supply lines to the International Space Station is preparing to resume flying on Antares rockets, which have been grounded since an October 2014 launch accident.

The boosters, manufactured and flown by Orbital ATK, have been outfitted with new Russian-made engines, a somewhat controversial import due to trade sanctions imposed by the United States after Russia invaded Ukraine's Crimea peninsula two years ago.

Pedigree aside, a pair of Antares' new RD-181 engines roared to life on Tuesday during a 30-second test firing at the Wallops Flight Facility on Wallops Island, Virginia. Hold-down clamps kept the rocket from flying off the launch pad.

WATCH VIDEO: Why Did the Antares Rocket Explode?

Preliminary analysis shows the rocket's upgraded propulsion system, its core stage and the launch complex, which was repaired and modified after the explosion, all worked as planned, said Orbital vice president Mike Pinkston, who oversees the Antares program.

For the test, Orbital fully fueled the rocket, conducted a launch countdown, ignited the engines, tested multiple throttle settings, including full power, and then shut down the motors.

Orbital said the test also validated launch pad operations, including propellant loading and use of the water deluge system, which protects the pad during launch.

Technicians will now clean the engines and return the first-stage used during Tuesday's test to a processing hangar for servicing.

Another Antares rocket is being prepared to return the Orbital fleet to flight in early July on a cargo run to the space station for NASA.

Antares debuted in 2013 and made three more successful flights before a problem with one of its original AJ26 engines triggered a catastrophic explosion seconds after liftoff on Oct. 28, 2014, destroying a Cygnus cargo ship bound for the station. 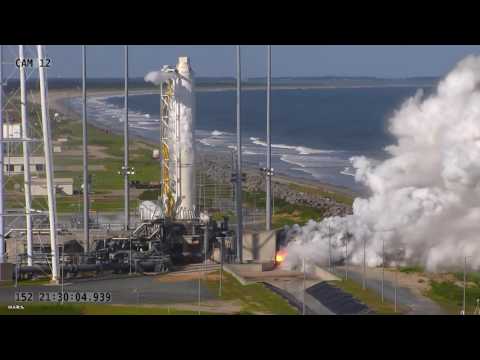 Orbital sped up plan to replace the engines, which were refurbished Soviet-era motors built in the 1960s for a super heavy-lift moon rocket that never successfully flew.

Aerojet Rocketdyne bought 43 of the mothballed engines and refurbished 20 of them for Orbital's Antares.

After the accident, Aerojet paid Orbital $50 million to settle a lawsuit over what Orbital says was a manufacturing defect in the liquid oxygen turbopump of one of the AJ26 engines.

While Antares was modified for the new RD-181s, Orbital bought two launches for its station cargo capsules from United Launch Alliance, a partnership of Lockheed Martin and Boeing.

The new Antares can deliver heavier capsules into the space station's orbit about 250 miles above Earth. This will enable Orbital to shave a flight from its original resupply contract with NASA and still deliver the same amount of cargo.

Orbital and Elon Musk's SpaceX were hired to take over U.S. cargo runs to the space station after NASA's space shuttles were retired in 2011. They will be joined by a third company, Sierra Nevada Corp., which will fly its Dream Chaser space plane to and from the station beginning in 2019.