A private rocket carrying supplies to the International Space Station has exploded seconds after launch from NASA's Wallops Flight Facility in Virginia.

No injuries were reported. The extent of damage to the seaside launch complex was not immediately available, nor the cause of the accident.

PHOTO: When Antares Delivered its Payload to Orbit

"We don't really have any early indications of exactly what might have failed," Orbital Sciences executive vice president Frank Culbertson told reporters after the accident.

"What we know so far is pretty much what everybody saw on the video: The ascent stopped, there was some disassembly of the first stage ... and then it fell to Earth. We don't have access to all the data yet," Culbertson said.

The 139-foot tall rocket blasted off from a commercially owned launch pad at 6:22 p.m. EDT. Launch had been delayed one day after a boat sailed into a restricted safety zone beneath the rocket's intended flight path.

Tuesday's liftoff occurred right on time but the flight ran into trouble about 10 seconds later. Range safety officers radioed commands to explode the rocket after about 20 seconds. Flaming debris rained down on the southern end of Wallops Islands.

"It's too early to comment on how bad the damage is to the pad. We know there was some. We don't know the extent yet," Bill Wrobel, director of NASA's Wallops Flight Facility, told reporters.

Orbital Sciences and NASA immediately launched an investigation in the accident, the first since the U.S. space agency turned to commercial companies to resupply the station after the space shuttles were retired.

"We will understand what happened hopefully soon and we'll get things back on track," Culbertson told the launch team.

Orbital Sciences has previously flown its Antares rocket four times, all successfully. The company is one of two hired by NASA to fly cargo to the space station. The second company, privately owned Space Exploration Technologies, is due to make its fourth cargo run to the station in December.

Tuesday's launch included an enhanced upper-stage booster and was the third of eight under the firm's $1.9 billion contract with NASA.

"We are very disappointed with the events of this evening," NASA space station program manager Mike Suffredini said. "The Cygnus spacecraft is a significant part of the logistics capability that supports the ISS."

"But we have every confidence in the Orbital team and their ability to get to root cause, resolve the issues and get back to flying," he added.

The Cygnus was not carrying any critical components for the station and the crew has a four- to six-month stockpile of food and supplies, Suffredini added.

Video below (excerpt from NASA TV): 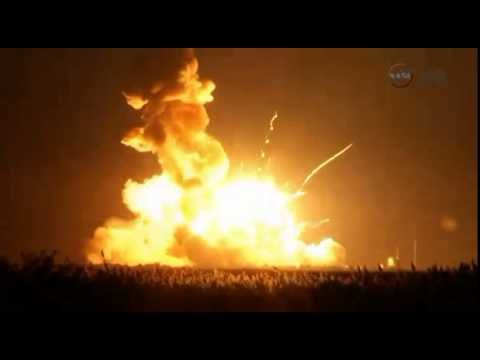 On Wednesday, Sept. 18, a second company hired by NASA to fly cargo to the International Space Station sailed through the first leg of its debut run. Orbital Sciences Inc. launched its Antares rocket carrying the unmanned Cygnus space vehicle into orbit.

The Soyuz rocket is rolled out to the launch pad by train on Monday, Sept. 23, 2013, at the Baikonur Cosmodrome in Kazakhstan. Expedition 37 is set for launch to the space station on Sept. 26.

In the Integration Facility at the Baikonur Cosmodrome in Kazakhstan, the Soyuz TMA-10M spacecraft is lowered into position for its encapsulation in the third stage of a Soyuz rocket Sept. 19.

On Thursday, Sept. 19, the Harvest Moon -- the full moon that falls closest to the autumnal equinox -- rises over Washington D.C.

This week saw the announcement of the winners for the Royal Observatory Greenwich Astronomy Photographer of the Year 2013 awards. The overall winner was this stunning photo of the Milky Way ('Guiding Light to the Stars'), taken by Mark Gee.

Giant clumps of newborn stars are stirred amongst clouds of dark dust and glowing gas in this amazing new image of IC 4628, also known as the "Prawn Nebula."

Resembling a swarm of starlings mid-flight these tiny blue points of light are the stars that comprise dwarf galaxy ESO 540-31, located in the constellation Cetus, The Whale.

Is that Han Solo frozen in carbonite? Or is it just an odd raised feature on Mercury's surface? This photo from NASA's MESSENGER probe tricked the brain into thinking this was the famous Star Wars smuggler -- alas, it's not.