The spring-loaded mandibles of the ant with the coolest name move at speeds up to 200 mph.

While there are no official rankings for these things, dispassionate observers will surely agree that Mystrium camillae, or the Dracula ant, has one of the coolest names in the insect kingdom.

According to newly published research from a team of admirably thorough entomologists, the Dracula ant can also claim a new crown — the fastest animal movement on record.

The researchers reveal that the mandibles of the Dracula ant can move at speeds of up to 90 meters per second, or a little more than 200 miles per hour. That’s around 5,000 times faster than you can blink your eye, and almost three times faster than the mandible speed of the previous record holder.

When all the numbers were crunched, researchers officially named the Mystrium camillae’s mandibles as the quickest moving animal appendages on record, with the fastest bite in the world.

“These ants are fascinating as their mandibles are very unusual,” said research co-author and University of Illinois entomology professor Andrew Suarez, in a statement.  “Even among ants that power-amplify their jaws, the Dracula ants are unique: Instead of using three different parts for the spring, latch and lever arm, all three are combined in the mandible.”

This unique configuration gives the mandibles a kind of spring-loaded dynamic. When the Dracula ant wants to bite or grab, it presses the tips of its mandibles together, building up internal stresses. When the stress hits a critical point, the mandibles snap open and shut at an incredible speed.

The action is similar to how humans snap their fingers, Suarez said. It’s a fundamentally different process than the bite used by the trap-jaw ant, a previous speed record holder. Trap-jaw ants and other similar insects bite down with their mandibles starting in an open position.

In any case, hours of observational data indicated that the Dracula ant’s powerful jaws are made for fighting, Suarez said.

“The ants use this motion to smack other arthropods, likely stunning them, smashing them against a tunnel wall or pushing them away,” he said. “The prey is then transported back to the nest, where it is fed to the ants’ larvae,” Suarez said.

The research was published this week in the journal Royal Society Open Science, with funding from the National Science Foundation, Smithsonian Institution, and National Geographic Society.

In a surprisingly intriguing video posted from the Smithsonian Museum of Natural History, research co-authors Fred Larabee and Adrian Smith debate the new speed record, which is evidently a Very Big Deal in the entomological circles. 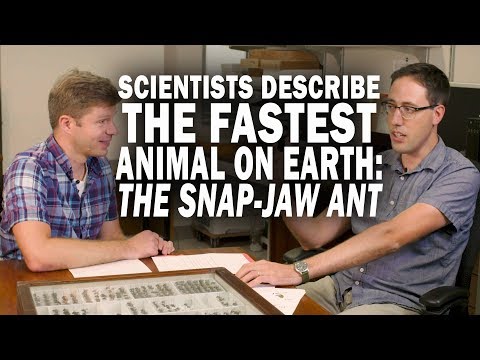 “This is the latest in a lineage of the fastest animal on Earth,” says Smith, head of the Evolutionary Biology & Behavior Research Lab at the North Carolina Museum of Natural Science. “At one point the trap-jaw ant had the fastest appendage movement, then I think they got overtaken by the termites. Officially, [the Dracula ant] is the fastest right now.”

But Larabee, postdoctoral research with the Smithsonian, advises caution, suggesting that the new record may not hold for long.

To record the speed of the mandible snap, the research team used an array of high-tech equipment.

“Scientists have described many different spring-loading mechanisms in ants, but no one knew the relative speed of each of these mechanisms,” Larabee explained. “We had to use incredibly fast cameras to see the whole movement. We also used X-ray imaging technology to be able to see their anatomy in three dimensions, to better understand how the movement works.”

For anyone who wants to place money on the developing ants-versus-termites showdown, valuable handicapping information can be found in the full research report at the Royal Society website.