A Neolithic rock with a precisely-carved hole was found in Sicily.

Featuring a 3.2-foot diameter hole, the rock formation marked the beginning of winter some 5,000 years ago.

The holed Neolithic rock was discovered Nov. 30, 2016 on a hill near a prehistoric necropolis six miles from Gela, on the southern coast of Sicily, by a team who was surveying some World War II-era bunkers.

"It appeared clear to me that we were dealing with a deliberate, man-made hole," archaeologist Giuseppe La Spina told Seeker. "However, we needed the necessary empirical evidence to prove the stone was used as a prehistoric calendar to measure the seasons."

Using a compass, cameras and a video camera mounted to a GPS-equipped drone, La Spina and colleagues carried out a test in December at the winter solstice. The idea was to find out if the rising sun at solstice aligned with the distinct hole in the rock feature. According to La Spina, the experiment was "a total success."

"At 7:32 am the sun shone brightly through the hole with an incredible precision," La Spina said. "It was amazing."

The 23-foot high holed stone would have marked a turning point of the year and the seasons, anticipating some hard and cold time ahead. The moment likely had a ritual importance. In fact, further investigation of the area revealed the site was a sacred place at the end of the third millennium BC. 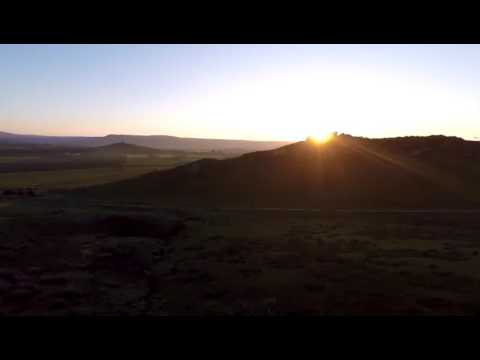 Not far from the holed stone, the researchers found several intact burials known as grotticella tombs. Excavated in the rock, these chamber tombs were the main form of burial for the Castelluccio culture that fluorished in the Sicilian early Bronze Age.

Interestingly, on the east of the calendar rock, La Spina and colleagues found what appears to be a menhir, or upright stone. The 16.4-foot-tall stone lay on the ground, but the presence of a pit near its base suggests the megalith was originally standing upright.

"It stood at a distance of 26 feet, right in front of the rock's hole," La Spina said.

The geological composition of the calendar rock and the menhir are different, indicating the monolite was cut and brought to the site from elsewhere.

"This obviously reinforces the sacrality of the site," La Spina said.

RELATED: Mysterious Slab in Russia May Be a Sundial

At least two other holed stones have been found in Sicily in the past.

"The newly found calendar rock appears to have been made by the same hand that carved the other two rocks," archeo-astronomy expert Alberto Scuderi, regional director of Italian Archaeologist Groups, told Seeker.

According to Giulio Magli, professor of archaeo-astronomy at Milan's Polytechnic University, the finding is very interesting, especially when associated to two holed stones found in the past.

"More research and scientific measurements must be taken," Magli said. "We should not consider the holed stones as a precise calendars or an instruments to observe the sun's cycle, but rather monuments that provided information on the solstices for practical and agricultural purposes."

WATCH: The Sun Is Causing Lightning on Earth!