For the first time, viewers are getting the chance to glimpse the secretive world of the big cat known as ‘El Jefe.’

For the first time, viewers are getting the chance to glimpse the secretive world of ‘El Jefe.' In a video released Wednesday by Conservation CATalyst and the Center for Biological Diversity, the jaguar can be seen walking through a forest and across a stream in the Santa Rita Mountains just outside Tucson.

"These glimpses into his behavior offer the keys to unlocking the mysteries of these cryptic cats" Aletris Neils, executive director of Conservation CATalyst, said in a statement. "We are able to determine he is an adult male jaguar, currently in prime condition. Every new piece of information is important for conserving northern jaguars and we look forward to building upon on these data so that we can collectively make better decisions on how to manage these fascinating and endangered cats."

Jaguars, which are the third-largest cats in the world after tigers and lions – once lived throughout the American Southwest, with historical reports on the South Rim of the Grand Canyon, the mountains of Southern California and as far east as Louisiana. But the endangered cat has gradually disappeared from its U.S. range over the past 150 years, mostly due to habitat loss and hunting efforts at the behest of the livestock industry.

"Studying these elusive cats anywhere is extremely difficult, but following the only known individual in the U.S. is especially challenging," Chris Bugbee, a biologist with Conservation CATalyst, said. "We use our specially trained scat detection dog and spent three years tracking in rugged mountains, collecting data and refining camera sites; these videos represent the peak of our efforts."

CATalyst and the Center for Biological Diversity are hoping the video motivates officials in Arizona to offer greater protection to jaguars as well as ocelots. The hope is that El Jefe will be joined by other jaguars that wander up from Mexico, a goal that increased in likelihood after the Center helped secure more than 750,000 acres of federally protected critical habitat for U.S. jaguar recovery. 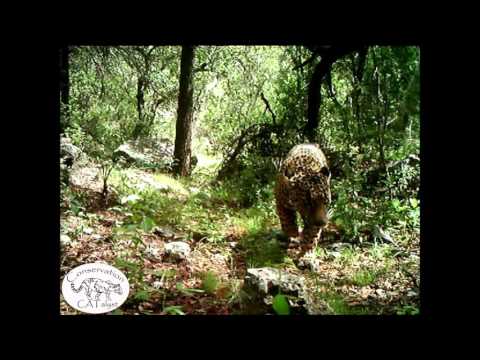 "Just knowing that this amazing cat is right out there, just 25 miles from downtown Tucson, is a big thrill," Randy Serraglio, conservation advocate with the Center, said. "El Jefe has been living more or less in our backyard for more than three years now. It's our job to make sure that his home is protected and he can get what he needs to survive."

El Jefe has been photographed repeatedly by remote sensor cameras in the Santa Ritas over the past few years. He is the only verified jaguar in the United States, since Macho B was euthanized as a result of injuries suffered in March 2009.

The confirmed presence of El Jefe could help rally opposition against a huge copper mine in the area being proposed by a Canadian company. Opponents of the mine fear it could permanently destroy thousands of acres of federal protected jaguar habitat while supporters said it could give a much needed boost to Arizona's economy – which has long depended upon mining.

"The Rosemont Mine would destroy El Jefe's home and severely hamstring recovery of jaguars in the United States," Serraglio said. "At ground zero for the mine is the intersection of three major wildlife corridors that are essential for jaguars moving back into the U.S. to reclaim lost territory. The Santa Rita Mountains are critically important to jaguar recovery in this country, and they must be protected."

Community on edge after homeowner finds anaconda in backyard Coyotes staring down drivers may be high on mushrooms Scientists give new lease on life for near-extinct Hawaiian crow Article first appeared on FoxNews.com.

Self-portraits with animals, or images even snapped by animals themselves, continued to make social media waves in 2015. While amateur chemist Robert Cornelius took the

in October 1839, the photos are considered to be a more modern phenomenon, given how easy it is now to take a photo with a cell phone. Cornelius, in contrast, had to pose for between three and 15 minutes to get his selfie, which was a silver-plated

. Brothers Michael and Neil Fletcher did not have much time to take this photo with a bald eagle that they rescued from a trap near Windy Lake in Ontario, Canada. After freeing the eagle's talon from the trap, they took a moment to snap this selfie before freeing the bird.

Photos: Animals Back From the Brink

are cat-sized Australian marsupials whose expressive faces and friendly ways have made them perfect subjects for photo close-ups. In fact, many Twitter and Instagram users report that, instead of running away from people and their cameras, quokkas seem to revel in the attention. Quokkas are endangered, however, so it is illegal in some locations, such as Rottnest Island, to handle the animals in any way. Fines of anywhere from $300-$3000 may be issued.

Ten Things You Need to Know About Quokkas

An elephant at Koh Phangan, Thailand, grabbed the camera of traveler Christian Le Blanc, resulting in this memorable shot that was shared thousands of times in 2015. Le Blanc was feeding the elephant when the photo was made. Le Blanc told

, "I quickly ran out of bananas and the elephant swiftly reached for my GoPro camera. Luckily it was on a continuous filming setting so the whole thing was captured."

Elephants May Use Trunks as 'Leaf Blowers' for Food

Another animal selfie that made the social media rounds in 2015 was this image. The organization

described it as being "The World's First Lemur Selfie." The photo really shows off the lemur's bright orange eyes, which suggest that the mammal is either a black lemur or a hybrid between a black lemur and a Sclater's lemur.

Some of the best animal selfies are taken by camera traps. Researchers use the camera traps to remotely and non-invasively monitor the populations of various species. The resulting photos are technically selfies, since the animal's body triggers the camera. In this case, the grizzly looks as though it is smiling and posing. There is reason for joy, given that the bears have made a remarkable comeback at Yellowstone National Park in recent years.

In 2015, the largest published dataset of camera trap photos was cataloged and made available for the public to search. The project, called

, consists of 1.2 million images, including this one of a vulture. Alexandra Swanson of the University of Oxford helped organize the photos. She told Discovery News that some animals damage the cameras, either intentionally or not. Most, however, "will lounge for hours in front of a camera, day or night," she said, suggesting that the majority are not bothered much, if at all, by the devices.

was snapped this year by an infrared camera trap set at Ahaggar Cultural Park in Algeria. Saharan cheetahs are a critically endangered cheetah subspecies. Farid Belbachir of the Laboratoire d'Ecologie et Environnement, Université de Béjaïa, Algeria, who has been studying the animals, estimates that fewer than 250 remain. Referring to the camera trap project, Belbachir told Discovery News, "This is the first time we have been able to collect scientific data on the rare Saharan cheetah, as in the past we have had to rely on anecdotes and guesswork."

Even a praying mantis had its moment in the selfie spotlight in 2015. According to a University of Kentucky

, praying mantises are among the insects that are widely kept as pets. As Steve Bender wrote for the magazine "

," a praying mantis "doesn't bark, shed, need shots or a litter box, and will look you straight in the eye with obvious affection."

A series of images taken by a female Celebes crested macaque named "Naturo" date to 2011, but gained a whole new social media life in 2015. That is because in September,

claiming that Naturo himself holds the rights to the photos that he took using equipment belonging to photographer David John Slater. In a statement, PETA explained, "If this lawsuit succeeds, it will be the first time that a nonhuman animal is declared the owner of property (the copyright of the "monkey selfie"), rather than being declared a piece of property himself or herself. It will also be the first time that a right is extended to a nonhuman animal beyond just the mere basic necessities of food, shelter, water, and veterinary care. In our view, it is high time."

As 2015 comes to a close, lawyers representing Naruto continue to stress that the ongoing PETA lawsuit is a serious one. Just a few weeks ago, Naruto's lawyers with the firm Irell & Manella

wrote in a brief

: "While the circumstances presented here are novel, the issue is anything but trivial." They claimed that protection under the law "does not depend on the humanity of the author, but on the originality of the work itself." "There is no dispute here that Naruto took the photographs spontaneously and without human assistance. In every practical (and definitional) sense, he is the 'author' of the works."