There was always that one kid in high school that could forge his mom's signature. Remember him? Sick and "get out of school early" notes.

Well that guy has some competition now.

Computer scientists at University College London have developed software that can analyze a piece of handwriting and then replicate it when writing new sentences, reports Future Timeline.

The program, called "My Text in Your Handwriting," uses a machine learning algorithm is built around glyphs -- which are basically the unique and specific ways that individual write certain characters. By analyzing a piece of writing, the software can learn what's consistent across the writer's style and then reproduce it.

Next, they wrote new sentences in the styles of these famous people and then asked people to distinguish between handwritten envelopes and ones created by the software. Watch the video below to learn more: 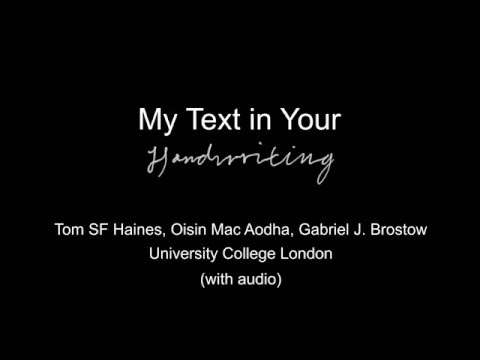 The computer-generated handwriting that fooled people up to 40 percent of the time.

Haines and his team think that such a system could give people who've lost the ability to write, including stroke victims, to write letters and cards to loved one.

It could also deconstruct handwritten notes to check for forgeries.

WATCH VIDEO: Why Cursive Is So Good for Your Brain

"Forgery and forensic handwriting analysis are still almost entirely manual processes – but by taking the novel approach of viewing handwriting as texture-synthesis, we can use our software to characterize handwriting to quantify the odds that something was forged," explained Gabriel Brostow, senior author.

"For example, we could calculate what ratio of people start their 'o's' at the bottom versus the top and this kind of detailed analysis could reduce the forensics service's reliance on heuristics."

What everyone wants to know, though, is can it get me out of gym class.