Political scientist P. W. Singer gives us his take on a military film that presents an extraordinarily dark vision of urban living.

If you weren't scared after Tuesday's election results, then this Pentagon training video may raise the hairs on the back of your neck. Megacities: Urban Future, obtained by investigative journalism site The Intercept under the Freedom of Information Act, has a tone that's just this side of apocalyptic. Relentless images of death and chaos display a future that's remarkably dark and disturbing.

Does the Pentagon know something we don't know? We called up scholar and political scientist P. W. Singer, widely regarded as an expert on 21st century military matters, to get his take. Singer's appraisal: The video may be troubling, but the deadly megacity scenario is all too real.

According to the Intercept, the video is used in courses at the Pentagon's Joint Special Operations University. JSOU is operated by U.S. Special Operations Command (SOCOM), the umbrella organization for the U.S. military's most elite troops.

The five-minute film plays out like a montage of dystopian science fiction movies. Still images of city skylines from around the world dissolve into photographs of chaos and violence. We see a grim parade of masked protesters, riot police, smoke-filled plazas, gridlocked streets, sprawling slums and collapsed buildings. 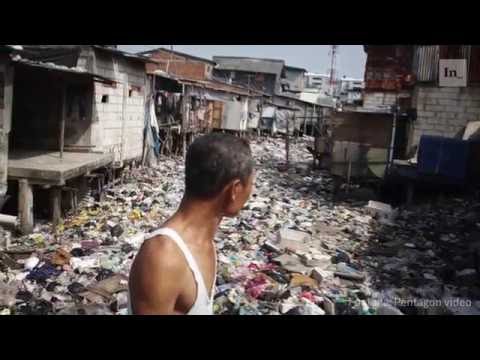 Sorrowful music plays beneath an ominous voiceover, which grimly intones a long list of ills and threats we can expect to see in the megacities of the future - criminal networks, racial tensions, poverty, pollution, terrorism. A typical passage:

The urban environment will be the locus where drivers of instability will converge. The cities that grow the fastest will be the most challenged as resources become constrained and illicit networks fill the gap left by overextended governments. The risk of natural disasters, compounded by geography, climate changes, unregulated growth and substandard infrastructure intersect to frustrate humanitarian relief.

It's important to bear in mind that the video is made for a military audience and comes from those tasked with training tomorrow's soldiers. If it's scary, it's supposed to be.

"That's sort of their job to do that," Singer said. "They're not going to say everything is fine and we don't need a Special Operations Command. They're going to scenario out worst cases rather than best cases."

According to the Pentagon video, by 2030, urban areas worldwide are expected to grow by 1.4 billion people and will contain 60 percent of Earth's population. From both the military and the law enforcement perspective, this shift presents an enormous challenge, Singer said.

"Cities are really tough to operate in," he said. "This is not a new thing. Sun Tzu, two thousand years ago, when he was advising his leader on the art of war, tells him: Avoid the city."

The concept of megacities is relatively new, and the term usually refers to urban centers with populations of 10 million people or more. At this scale, the megacity presents an entirely different class of complexities.

RELATED: How New York Is The World's Most Wasteful City

"It's a daunting place," Singer said. "There are all these people. If it's a terrorist or insurgent you're dealing with, they can hide out among the civilian populace. It can make it easier for bad things to play out and bad groups to recruit. And if it's a group that originates there, then it's their home turf. It's their Sherwood Forest."

Even setting aside the strictly military viewpoint, Singer believes that our rapid urbanization is scary because it's uncharted territory - and it's coming in fast.

"We're seeing mass movement of the human species," he said. "For the first time in human history, we're really becoming an urban species."

The Pentagon video suggests that the U.S. military, at least, is preparing for a grim future.

"Maybe it's dark, but it reflects the reality," Singer said.