This quickly degradable drone has been designed to carry medical supplies to pre-programmed GPS locations.

The octocopter flew about a thousand feet up into the sunny California sky carrying what looked like a miniature stealth fighter jet replica made from cardboard. Then the copter released the unusual paper plane. As the plane approached the ground, it appeared to steer itself. Well, that's clearly not a toy.

This inexpensive paper plane is actually a functional drone designed to make targeted one-way supply deliveries for humanitarian and disaster relief. It was created by a dedicated team at San Francisco-based Otherlab, a combination research group and startup incubator.

Otherlab's team, led by Mikell Taylor, made the drone in response to a DARPA call for disappearing unmanned systems as part of the agency's Inbound, Controlled, Air-Releasable, Unrecoverable Systems (ICARUS) program. It's designed to land within about a 33-foot (10-meter) radius of a pre-programmed GPS spot.

Currently, dropping emergency supplies like blood and vaccines from the air is messy and inefficient with plenty of loss, Taylor explained. Sending regular drones is expensive because they have a bad habit of crashing and turning into trash. Airdropped cargo attached to a parachute can break apart in mid-air, land in a pond or end up in the wrong hands.

"DARPA was interested specifically in something that could degrade fairly quickly so when you deliver your supplies with a hundred of these, you don't have drones littering the ground for the next 20 years," Taylor said. To that end, her team constructed the body from flexible cellulose-based material. Inside were off-the-shelf electronics, although DARPA has a separate program for electronics that dissolve on impact. 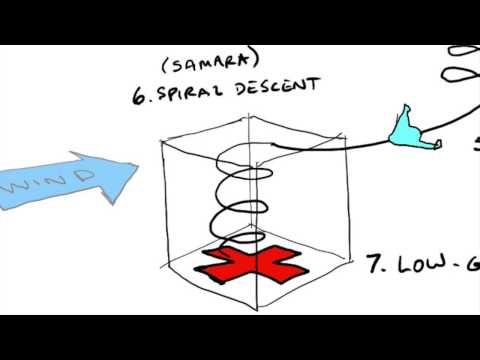 Otherlab partnered with a company called MycoWorks to look at a cardboard-like material impregnated with fungal spores, but Taylor said the drone could be made from other cellulose-based materials depending on the end use. For example, drones in rainy areas would have a special coating so they don't disintegrate too quickly. Drones meant for reuse might have more durable exteriors.

RELATED: The U.S. Army's Hoverbike Takes to the Air

Recently Otherlab performed engineering tests at a dedicated space in California subject to military regulations, which allowed them to drop the drone from much higher than the FAA rules allow. The robotic glider performed well, landing gently on the ground near its target. However, Taylor said she'd love to see it deployed from a cargo aircraft at tens of thousands of feet.

Since the DARPA proof-of-concept grant ended in December, Taylor said that her group is actively looking for funding to continue making progress. She's hopeful about the drone's humanitarian applications.

"There are people affected by floods, people who are affected by war," she said. "We hear constantly how difficult it is to get water, food, medical supplies to places like this. It's exciting to work on something that might solve that problem."

WATCH VIDEO: The Rise of Drones