A Lucky Lab Accident Results in Bucketloads of Graphene

Apparently, when it comes to making graphene, the 21st-century "miracle material" taking manufacturing by storm, you can do things the hard way or the fun way.

The hard ways - and there are dozens - all have their own complications. Some require high temperatures and long "cooking" times, others require the use of hazardous chemicals like sulfuric acid or hydrazine.

The easy way comes from physicists at Kansas State University, and the process is admirably straightforward: Fill a steel containment unit with oxygen and hydrocarbon gas, detonate it with the spark and, voila, a bucketload of soot-like graphene. Scrape it out and repeat.

Feel free to peruse the full details in the recently issued patent. But the bottom line, according to the research team, is that this new detonation technique can produce high yields of graphene in a one-step process that will save manufacturers significant amounts of time and money.

"Our process has many positive properties, from the economic feasibility, the possibility for large-scale production and the lack of nasty chemicals," said lead researcher Chris Sorensen in the university's official announcement. "What might be the best property of all is that the energy required to make a gram of graphene through our process is much less than other processes, because all it takes is a single spark."

Check out the demo video for the Kansas State project below. 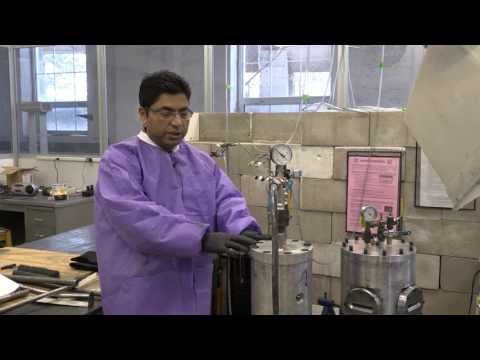 Quick primer: Graphene is the undisputed rock star of material sciences in recent years. Hundreds of times stronger than steel, it's an extremely conductive form of carbon that can be reduced to sheets of material down to the thickness of a single atom. Sometimes referred to as sliced diamond, graphene's unique hexagon lattice structure makes it incredibly strong.

For all practical purposes - and there are plenty - graphene is also the world's thinnest industrial material. It's being used in literally hundreds of different industries, from consumer electronics to space exploration. The scientists who finally isolated graphene were awarded the Nobel Prize in Physics in 2010.

The KSU technique is simpler, cheaper and scalable for industry, according to the researchers. It's also the result of a happy accident. Initially, the KSU lab technicians weren't even trying to make graphene, they were working on a separate project concerning aerosol gels. But when they analyzed the residue in the detonation chamber, described as looking like dark angel food cake, they found they'd produced graphene.

"We got lucky," Sorensen said.

In a related development, scientists in Australia this week published details on a new method of generating graphene with soybean oil.

The process, which involves heating oil in a tube furnace, is also relatively simple and inexpensive, according to researchers at the Commonwealth Scientific and Industrial Research Organisation (CSIRO). In fact, if the technique can be effectively scaled up, the research team says it could potentially cut the cost of graphene production ten-fold.

The Australian research was published in the journal Nature Communications.