90 Percent of Seabirds Have Plastics in Their Gut

The amount of plastic ingested by seabirds is now nine times more than it was just a few decades ago.

About 90 percent of seabirds today have plastic in their bodies, according to researchers who point out that there are 360,000 pieces of plastic for every square mile in most of the world's oceans.

The amount of plastic ingestion by seabirds has dramatically increased in just the past few decades - 10 percent of seabirds were found to have plastic in their guts in the 1980s. The latest findings are published in the Proceedings of the National Academy of Sciences.

Animals That Could Become Extinct in Your Lifetime

"This really is an issue that concerns every single person, and their daily habits," biologist Boris Worm of Dalhousie University, who authored an accompanying commentary on the new research, told Discovery News. 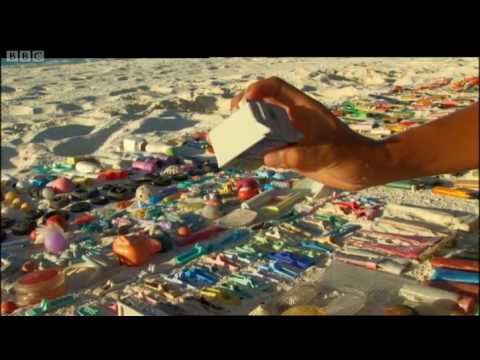 Chris Wilcox of CSIRO Oceans and Atmosphere Flagship and Imperial College London and colleagues Erik van Sebille and Britta Denise Hardesty conducted the research. They surveyed data on 186 species of seabirds, incorporating information on plastic pollution in the birds' habitats, foraging strategies, body size and more. This was used to create a model predicting debris exposure for the birds.

The researchers next compiled studies of actual plastic ingestion by birds. The reports dated from 1962 to 2012. The statistical model and the other data show that if the same studies were conducted today, "the ingestion rate would reach 90 percent of individuals," Wilcox and colleagues wrote.

The forecast is even bleaker for 35 years from now, if our habits not change.

"We predict plastics ingestion is increasing in seabirds, (and) will reach 99 percent of all species by 2050," the authors wrote.

Based on the model, they believe the threat is greatest to seabirds located in the Tasman Sea, between Australia and New Zealand. In this location, there is high plastic garbage concentration mixed with high seabird presence, because birds have relied on the region for centuries for breeding, foraging and more.

As for why birds would even bother to ingest plastic, Worm explained, "They mistake them for food when skimming surface waters, searching for visible particles."

Worm said that much of the plastic in the ocean flows in from rivers, so the originating sources "could be way inland."

8 Million Tons of Plastic Lands in the Ocean Every Year

In addition to eating plastic - which can lead to poisoning, blockage of the intestines and other problems - birds and other wildlife can be impacted by the materials even if they do not ingest them. Six-pack plastic holders, for example, have been found wrapped around the necks of birds, turtles and other animals, often horrifically deforming them or suffocating the victims to death.

Reducing our reliance on plastics combined with more effective waste management could reduce ocean pollution and the associated health threats to seabirds and other species, according to the scientists.

As Worm said, "The biggest single problem is the rapid economic growth and increased use of disposable plastics in many parts of the world, where the waste collection and management (such as safe storage and recycling) system has simply not grown at the same pace. That is, the waste is disposed anywhere, and not stored properly."

Red-footed booby on Christmas Island in the Indian Ocean, surrounded by plastics and other refuse.

Our oceans have a pollution problem. Over a decade ago, the North Pacific Gyre was discovered harboring untold tons of plastic trash, and quickly became known as the "Great Pacific Garbage Patch." It was a shocking wake-up call to the world which showed that even the most remote corners of the global were not immune to our throw-away culture. There are five main gyres in Earth's oceans. In January, members of the ocean advocacy group 5 Gyres set out to chart the North Atlantic Gyre. They're suspicion: that the world's water was more polluted than anyone knew, and that a "Great Atlantic Garbage Patch" was lurking somewhere between the U.S. Virgin Islands and Bermuda. But no one had ever looked for it before.

No sooner had the first trawling net been raised from the water than the crew's worst fears were confirmed: plastic. The material's pervasiveness struck Stiv Wilson who, as he says, "began the cruise an independent journalist, and ended it a board member of 5 Gyres." "If you look for it, you will find plastic everywhere, in or out of the gyres," Wilson said. "If you go two miles off the coast of San Francisco and trawl you will find it. It's denser in the gyres, but it's everywhere."

Most of the brown gunk in this image is natural. It's sargassum algae, which gives the North Atlantic Gyre its other name: Sargasso Sea. But the white flecks researchers are reaching for are chunks of plastic floating near the surface. Contrary to what many people think, ocean "garbage patches" are really more like thin stews of pollution. All shapes and sizes of plastic trash hang in the water column, sometimes very spread out, sometimes arranged by wind patterns into dense lines that extend to the horizon.

During nearly 40 trawls of the North Atlantic Gyre taken throughout the trip, the net never came up empty. "We got plastic every single time," Wilson said. This pile of garbage was hauled out of the water by hand over the course of about 40 minutes. "This was just two people using crappy pool nets to scoop stuff up," Wilson said. "We got 10 percent of all the stuff in the water, maybe."

In amongst small-fry lanternfish are blue flecks of plastic, and even a few BB-sized pellets of "nurdles" -- bits of virgin plastic that fell off a freighter or were washed down a river and into the ocean before they were ever made into a product. "As I like to say, 'shit rolls downhill, and at the very bottom of the hill are the oceans,'" Wilson said. Major rivers like the Columbia and the Mississippi can carry huge amounts of plastics into the oceans, where they remain permanently. Once in the open ocean, plastic may be mistaken for food by fish like the lanternfish. Scientists don't know how often this happens, but they worry that chemicals trapped in plastic could leach into animal tissues and begin a slow march up the food web. Sea birds, large ocean predators -- even people -- may be having this stuff for lunch without even knowing it.

Along for the ride was Dutch artist Maarten vanden Eynde (left), who is collecting material to build a reef 40 meters long by 10 meters wide (131 x 33 feet) out of plastic removed from the ocean. He was not disappointed. The expedition collected 876 pounds of plastic, some of it from beaches in the Virgin Islands and Bermuda, but mostly from the open ocean. That included what Stiv Wilson called "his favorite piece of plastic" (right) -- a small fleck with the word "from" still visible, looking like a fractured message from whoever discarded it.

Hauling plastic out of the oceans by hand is never going to work. Wilson said that for the time it takes to fill a freighter with junk, several times that much will be dumped into the sea through everyday human activity. "It's growing at an alarming rate," he said, though he admitted that no one's really sure how much plastic is dumped every year, or how much makes its way to the gyres.

Like the name says, the goal of 5 Gyres is to explore all five of Earth's main ocean gyres. So far the North Atlantic and Pacific gyres are the only ones to have been extensively surveyed. But Wilson said that his colleagues have found plastic in the Indian Ocean gyre during a recent preliminary cruise. "The problem is growing at an alarming rate," he said. The only way to stop it is a dramatic reduction of the plastic we use today, especially single-use items like coffe cup lids, grogery bags, and soda straws. "You're not seeing car bumpers out there," Wilson said. "It sounds trite, but really what's needed is a grassroots effort to reduce our addiction to single-use plastics."