The latest viral video featuring Boston Dynamics' Atlas robot is the latest in a long line of delightful weirdness.

In recent years, the engineers over at Boston Dynamics have been doing some of the most advanced robotics work on the planet. They've also been diligent about documenting their work and posting videos. For the dedicated robot video enthusiast, the company's YouTube channel is the gift that keeps on giving.

The latest video featuring Boston Dynamics' robotic stars actually comes from the Institute for Human and Machine Cognition (IHMC), and shows BD's Atlas robot balancing -- on one foot -- atop the edge of a plywood board less than an inch thick. IHMC is currently developing the balancing algorithms on display here -- check it out: 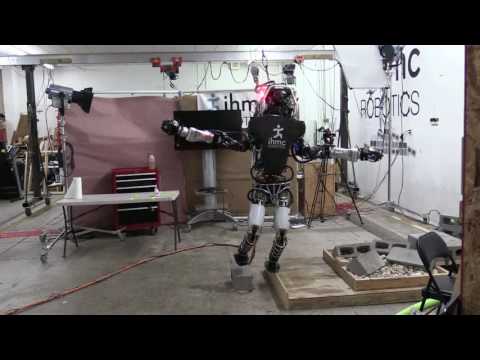 It's a short clip, just under 30 seconds, and might not seem like much at first glance. But consider that the Atlas is 330 pounds, six feet tall, and built with innovative hydraulic technology that wasn't even close to existing just a few years ago. Special effects in movies and TV have perhaps dulled our appreciation for this stuff. Those fleets of humanoid robots at the movies are digital fakes. Atlas is the real deal.

Boston Dynamics was founded in 1992 as an offshoot of the MIT Leg Laboratory, and that's what they still specialize in -- robots with legs, and all the mechanical and gravitational complexities that come with this form of locomotion. Wheels? Anyone can make a robot with wheels.

The company's gallery of robots really is worth checking out: There's the Cheetah, a four-legged mechanical critter that still holds the land speed record for legged 'bots. Big Dog, designed to carry heavy loads, can navigate rough terrain and inclines with 300-plus pounds on its back. Then there's SpotMini, the robot that does dishes.

Atlas remains the lab's celebrity robot, though, and it has quite the film career going, actually. Alert readers may recall the viral video from a few months back in which Atlas gets pushed and shoved, and generates some 21st century pratfall comedy. (For a NSFW treatment of that video, check this out.)

An interesting side note to all this: Google purchased Boston Dynamics in 2013, but has recently been shopping around for a buyer. According to this fascinating report from Tech Insider, the lab's stream of videos may actually have contributed to the uneasy relationship between the two companies.