4-D Origami Could Fold House Into a Backpack

A radical new origami-inspired technology could change the fundamental elements of construction and engineering.

Called snapology, the material actuates on its own - changing shape and size over a given period of time. The dynamic nature of the material could usher in a whole new range of buildings that adapt, retract, flatten and then pop up.

In recent years, the art of origami has inspired a remarkable number of engineering and design breakthroughs. You've got your origami wheels, your origami bridges - even origami robots. As Kenny Rogers has so sagely instructed us: You've gotta know when to fold 'em.

Snapology is also inspired by the origami technique. The basic unit is a series of connected cubes that, when assembled, results in a shape with 24 faces and 36 edges. The cubes can be folded along each of the edges to change shape. In certain configurations, the edges also act as hinges.

Dream This Up: Structures Meld Art And Design

The entire structure can be pressed totally flat, but by building in pneumatic actuators, designers can essentially "pre-program" different and potentially quite sophisticated shapes. The actuators can be triggered by electricity, thermal energy or even water. Set the folded material down, throw in a charge, and the structure unfolds and assembles itself.

"Whereas current approaches to these applications rely on standard mechanics, this technology offers unique advantages such as how it integrates surface and structure, its inherent simplicity of manufacture, and its ability to fold flat," said Hoberman.

What makes the breakthrough particularly promising is that the technology is fully scalable, researchers say. Depending on materials, the system could be deployed to create large structures like pop-up buildings, or nanoscale assemblages like surgical stents delivered through the bloodstream.

The technology is still in the very early stages of development, but the research team has already connected a test series of 64 cells in a 4x4x4 cube that can change shape or fold completely flat. Here's a demo video of the 4-D origami system in action: 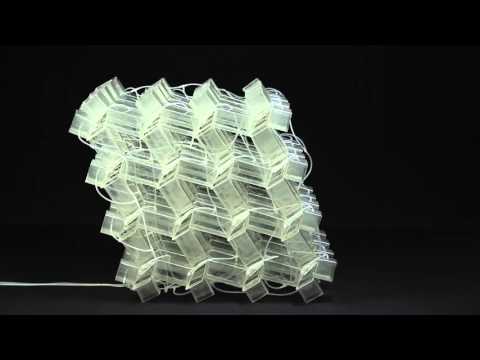