The unassuming 3D-printed gravity meter was commissioned by a private citizen and manufactured aboard the ISS, and represents a significant step forward in space exploration.

Like many new technologies being applied to this New Space Age, 3D printing has the potential to transform our future in ways we can't yet imagine.

The idea of being able to one day arrive at an alien world and manufacture everything needed from the surroundings may seem like something from science fiction - but in some cases, science fiction could be renamed science prediction.

Last week, this new 3D-printing industry, made a quite unassuming but significant leap forward, with the manufacture of the first ever item for a private citizen. (Items have been printed on board the space station before - including basic tools during 3D-print demonstrations - this is the first private commission.)

The print is a gravity meter - a device that is used to give astronauts a visual cue when they've left a gravitational environment - designed in the style of a modern-day sextant, to symbolize our future in space. On one side is an image of Buzz Aldrin on the moon, and on the others are the Made in Space logo - representing the company that commissioned the piece and built the printer - and Henry Crown Fellowship Program logo - an organization that seeks to develop the next generation of community-spirited leaders.

"This is incredibly significant because it shows that access to space is far more affordable and readily available now that there is an alternative to launching objects on a rocket," said Jason Dunn, co-founder and chief technical officer at Made In Space who printed the gravity meter using their Additive Manufacturing Facility (AMF) onboard the International Space Station. The AMF was installed on the ISS in 2016.

Prominent space investor and philanthropist Dylan Taylor, who worked with Made in Space on its design, commissioned the print for an undisclosed amount.

"I wanted to design something which symbolizes our new era in space," said Taylor, who plans to display the piece in the Museum of Science and Industry in back to Earth in April.

"My hope is that it helps start 'dinner table' conversations in people's homes," he told Seeker. "That non-space advocates will have their eyes opened by it and are inspired to better understand how space can positively impact humanity. It's just amazing to have a concept like this realized."

Aside from the inspiration of an ordinary citizen being able to manufacture something in orbit 250 miles above our heads, this is a significant step for commercial manufacturing in space.

"The number one goal for the AMF program was to enable anyone and everyone to have access to space manufacturing," Dunn said. Privately funded print missions are key in making this true vision a reality.

The 6-inch cubed gravity meter is made from a material called ABS (Acrylonitrile-Butadiene Styrene), which is the same (oil-based) plastic used to create Lego toys. The AMF creates an object by using an extruder to heat a polymer filament to a malleable state, and then dispenses the filament onto a particular location on a heated bed or build plate. This is repeated over and over until the 3D object is fully manufactured.

Of course, this whole process is more of a challenge in microgravity.

"The biggest challenge is adapting terrestrial manufacturing capabilities to the space environment," Dunn said, "which we have gotten pretty good at. But there are other challenges including remotely operating a manufacturing facility on orbit with little communication with the crew on the station."

RELATED: 3D-Print Your Laugh and Launch It Into Space

In the same way space exploration is shifting solely from governments to individuals and private organizations, this is the first -ever demonstration that the way we manufacture things in space is no longer the preserve of governments or private companies.

Although the uses of the object are mostly symbolic, for now, it's a crucial next step forward in helping to show that space is becoming accessible to everyone. "This is an absolute disruptive technology for the world going forward," said Taylor, who added that he and Made In Space are now working with other individuals on future space prints.

For former NASA astronaut Michael López-Alegría, it is another step in the long journey of the democratization of access to space.

"It also reflects NASA's interest, and indeed that of the entire ISS partnership, in commercializing low-Earth orbit," López-Alegría told Seeker. "Manufacturing in microgravity is but one of many lines of revenue that entrepreneurial companies are vigorously pursuing."

The hope is that this will allow national space agencies to properly shift their focus to deep-space exploration, he added.

Made In Space's plans for the future include a public-private partnership with NASA to develop Archinaut, a project designed to manufacture and build satellite arrays and the next generation of spacecraft in space. This demonstration could be a game-changer for the way we explore space and manufacture orbital assets - an endeavor that would be impossible without 3D-printing technology.

And perhaps even one day being able to print objects in space will seem as ordinary as the famed replicator in "Star Trek" appears to the Starship Enterprise's crew. All of this is just another step toward that science fiction future we cannot yet fully grasp, but one that will change the way we explore and live in space as we march toward becoming an interplanetary species. 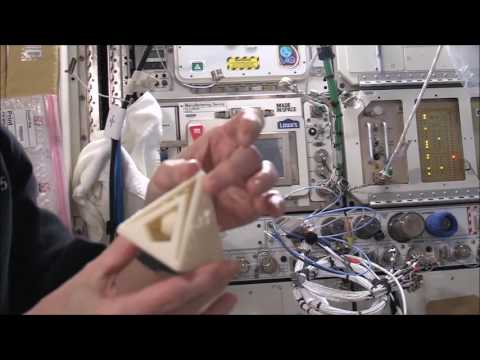