The prints were uncovered at the remains of a large building in the fabled Pi-Ramesse, Egypt's capital during the reign of the King Ramses II.

Mysterious, 3,000-year-old footprints of ancient Egyptian children have emerged alongside rare painting fragments, at what appears to be the site of a royal palace or temple.

The prints were uncovered at the remains of a large building in the fabled Pi-Ramesse, a city which was Egypt's capital during the reign of the King Ramses II.

"It is likely to be a temple or a palace," he said.

As they excavated the structure, a team of archaeologists from the Roemer-Pelizaeus Museum in Hildesheim, Germany, found a mortar pit measuring approximately 8 by 26 feet.

At the bottom of the pit, a layer of mortar was still present, etched with the small prints.

"The children's footprints had a size of 15-17 centimeters (5.9 – 6.6 inches) , thus relating to children between 3 and 5 years of age if one follows charts for modern children," Henning Franzmeier, field director of the Qantir-Piramesse project in Egypt's Nile Delta, told Seeker.

The archaeologists cannot yet say if there was more than one child.

"The differences in size are not big enough for us to clearly differentiate. And they are also not so well preserved that we could distinguish so far any other features of the feet," Franzmeier said.

Built on an island in the easternmost Nile branch, some 65 miles northeast of Cairo, Pi-Ramesse (modern Qantir) flourished during the 66 years of Ramses II's reign and for more than a century after his death.

"The city had an extension of about 10 square miles, making it the one of the largest settlements of the Late Bronze Age in the Eastern Mediterranean and the Middle East," Franzmeier said.

However, toward the end of the 20th Dynasty the city began to decline, and in the 21st Dynasty (1075–950 BC) the capital was moved about 18 miles north to Tanis.

The city's monuments and temples were plundered, their stones recycled at Tanis and other sites. Abandoned and forgotten, Pi-Ramesse remained lost in the desert sand for thousands of years.

Today nothing of the city's glorious past can be found at the surface. However, its monumental remains have been identified through magnetic measurements. These can detect the differences in the magnetic susceptibility of various materials in the ground.

"Therefore we are able to detect walls, especially those made of mud bricks," Franzmeier said.

A major investigation was carried out between 1996 and 2012 by geophysicist Helmut Becker and colleagues at the Bavarian State Office for the Preservation of Monuments. The team conducted an extensive survey covering about 1 square mile - one of the largest such surveys ever carried out in archaeology.

Among the features recorded was the building complex excavated by Franzmeier's team. Measuring about 820 by 490 feet, the structure is similar in size to the funerary temple, known as the Ramesseum, which was dedicated to Ramesses II in Thebes, "The layout of the central part definitely resembles a temple," Franzmeier said.

RELATED: Is There a Secret Chamber in King Tut's Tomb? A Final Hunt Will Investigate

The reason for the children's presence remains a mystery. Although no modern concept of banning child labor was in place, the footprints seem to be too small even for children who may have been working.

On the other hand, it appears unlikely that royal kids were left to play in the mud and mortar.

In the next season Franzmeier's team will excavate more of the area and larger parts of the mortar pit, which has only been partially cleaned.

"We are planning to involve specialists which would analyze the footprints and will hopefully find out a little more," Franzmeier said.

The pit where the prints were found was also filled with smashed pieces of painted wall plaster. Unfortunately, most fragments are very small, so no motifs were recognized.

"Nonetheless the strokes suggest that we are dealing not just with different zones of color, but most probably polychrome figural representations," Franzmeier said.

The colors identified so far are black, yellow, red and different shades of blue.

"As they are found within the mortar pit, thus representing debris, we do not yet know exactly where they came from," Franzmeier said. "But it might well be a good guess that they came from one of the walls of the monumental building complex."

WATCH: We Finally Know How the Pyramids Were Made 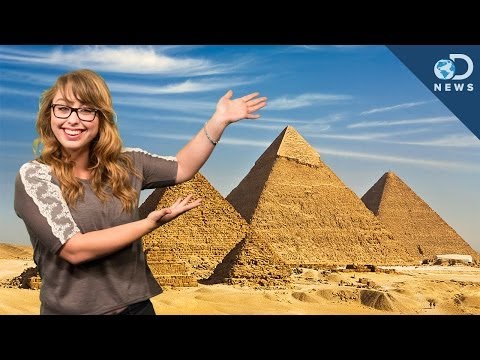