3-D Video Tours Space Station, Inside and Out

Put on your 3-D glasses, this narrated video takes viewers on an end-to-end journey through the International Space Station.

Very few people get to fly to low Earth orbit, let alone live there. But now, the rest of us can enjoy a simulation of the experience, thanks to a new virtual tour of the International Space Station (ISS) created by the European Space Agency.

Available in six languages - English, French, German, Italian, Spanish and Dutch - the narrated video takes the viewer on an end-to-end journey through the station, inside and out. Americans may particularly enjoy a close look at the Russian side of the space station, which is rarely featured in NASA photos.

Space buffs will recognize some file footage, but the full edited movie provides the illusion of being weightless inside the ISS and flying closely outside it. A 3-D version of the video is available on YouTube, and is best viewed, of course, through stereoscopic 3-D glasses. 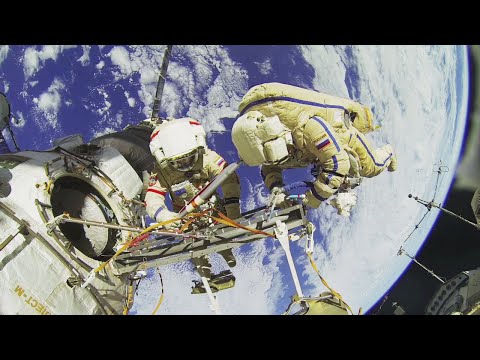 A short segment showing cosmonauts eating a meal gives a real sense of what it looks and feels like to eat in space. The narrator notes that there are no showers on board the space station, and that sponge baths are the rule.

Ultimately, the virtual tour provides a sense of the enormous scale of the station's real estate. Although the living quarters are limited - in fact, they're even more cramped than a submarine - the station itself is nearly large enough to get lost in. At nearly four times as large as the Russian space station Mir, it's the biggest thing humans have ever built in space.

Get More from Space.com

Copyright 2016 SPACE.com, a Purch company. All rights reserved. This material may not be published, broadcast, rewritten or redistributed.

Caption: Expedition 47 Flight Engineer Tim Peake of ESA took this photograph on April 6, 2016, as the International Space Station flew over Madagascar, showing three of the five spacecraft docked to the station.

WATCH VIDEO: Can We See 3D Without 3-D Glasses?