The Arctic seems to be a never-ending source of dismal climate news, particularly when it pertains to sea ice.

Let's recap. Sea ice extent has set monthly record lowsthis winter (after setting a seasonal record low just lastwinter). In general, its extent is shrinking across all seasons. But what's even worse news is the character of sea ice is also changing. It's getting younger.

Warming air and water has eroded away much of the Arctic's oldest ice, leaving behind brittle young ice that melts faster. In 1985, ice older than 4 years comprised 20 percent of all Arctic ice pack. By 2015, it was just 3 percent. That puts the oldest sea ice on the brink of extinction. In comparison, young ice used to be about half of all Arctic ice pack in 1985. Now it's about 70 percent.

You might think younger sounds better, but you would be sadly mistaken. That's because older sea ice is stronger and less prone to melt than its younger counterpart.

The transition from old to young is in part why summer melt seasons have become more and more dramatic in the Arctic. 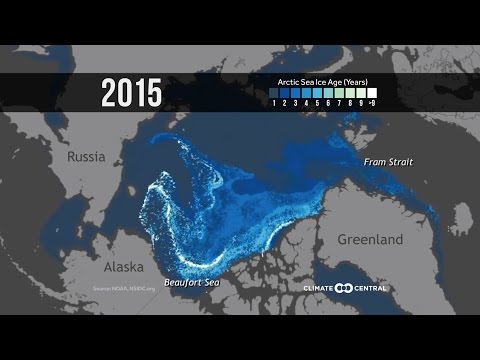 Temperatures are expected to keep rising due to climate change. That means the bad news is likely to continue, and we'll likely see the end of the oldest Arctic sea ice as well as the continued decline in ice extent.

Winter Tops Charts As Warmest on Record For U.S.

You've heard a lot about how human-driven climate change will lead to hotter temperatures, cause sea levels to rise and make storms more intense. But it's projected to have plenty of other unpleasant and even disastrous effects as well. Here are 10 of them. Scientists believe that rising temperatures will lead to increased evaporation of the Great Lakes' water, and precipitation won't make up the difference. That means we're likely to see declines in water levels over the next century, and one study predicts they may drop as much as 8 feet.

Thanks to climate change, jumbo-sized ragweed plants will spew out more pollen for a longer, more miserable allergy season.

By altering the wild environment, climate change makes it easier for newly mutated microbes to jump between species, and it's likely that as a result, diseases will emerge and spread across the globe even more rapidly.

A recent Nature article reported that male Australian central bearded dragons have been growing female genitalia because of rising temperatures, a phenomenon that had not previously been observed in that species.

Rising sea levels are wiping out beaches all over the world already. Importing fresh sand and building them up again is only a temporary solution. To make matters worse, there's currently a sand shortage, due to demand from fracking, glass and cement making.

Bark beetles are eating old growth forests, because the winters aren't cold enough to kill them off. So more trees like this American Elm will die.

Warmer temperatures mean there will be more water vapor trapped in the atmosphere, leading to more lightning. A University of California-Berkeley study predicts that lightning strikes will increase by about 12 percent for every degree Celsius gained.

Wine grape harvests are being hurt. Regions that have historically supplied the world’s best wine will no longer be hospitable climates to grow wine grapes, according to research by the Environmental Defense Fund and others.

Coffee flavor depends upon really narrow conditions of temperature and moisture, and climate change is going to wreak havoc with that. Worse yet, as coffee growing regions become warmer, pests that couldn't survive in the past will ravage the crops. This is already being seen in Costa Rica, India and Ethiopia, which have experienced sharp declines in crop yields.

California Drought by the Numbers

Scientists say that as ice sheets and glaciers melt, the weight that's removed from the Earth's crust changes the stresses upon volcanoes. That unloading effect can trigger eruptions.

What Warming Means For 4 Of Summer’s Worst Pests