The remains were found in the same wreck where a device known as the Antikythera mechanism was recovered.

A human skeleton dating to 2,000 years ago has just been found on the wreck of an ancient Greek merchant ship buried in pottery shards and sand, according to a news story published in Nature.

Usually sharks or other fish eat the bodies of shipwreck victims, or the remains are swept away and completely decay. This is why the skeleton of this victim, a young man, is incredibly rare and may become the first of its kind to yield DNA. 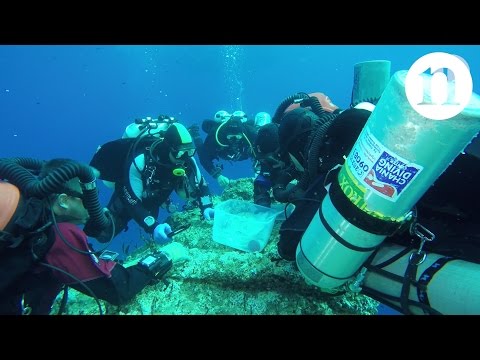 "We're thrilled," Brendan Foley, an underwater archaeologist at Woods Hole Oceanographic Institution in Massachusetts, and co-director of the excavations team, told Jo Marchant of Nature. "We don't know of anything else like it."

Foley contacted genetic expert Hannes Schroeder from the Natural History Museum of Denmark. Schroeder is awaiting approval from Greek authorities to begin the DNA analysis, which could reveal the victim's hair and eye color, ancestry and more.

The shipwreck victim might have been a tech wizard of his time, as he was found with what is by far the most technologically sophisticated artifact to survive from antiquity: a clockwork device known as the Antikythera mechanism. The device modeled the motions of the sun, moon and planets with surprising accuracy.

Such information clearly was not enough to save the man and his other ship mates, who went down in a storm off the small Greek island of Antikythera after their ship struck rocks. The men were likely transporting luxury goods from the eastern Mediterranean to rich Roman buyers when the ship sunk.

Prior excavations at the site of the wreck have unearthed a well preserved bronze head from a statue, wine jars, glassware, two bronze spears from statues, gold jewelry, table jugs used by the crew and more. Also found were exceptionally large anchors and a "war dolphin," which was a weapon used to damage attacking vessels.

Foley suggested that the victims of the wreck -- probably 20 or so in total, based on the ship's size -- drowned to death a/la the Titanic, but even worse.

"We think it was such a violent wrecking event, people got trapped below decks," he said.

It is also possible that the young man was a slave, underwater archaeologist Mark Dunkley from the organization Historic England said.

He explained, "The crew would be able to get off relatively fast. Those shackled would have no opportunity to escape."

Supporting his theory is the fact that corroded iron objects were found surrounding the bones. Additional research is needed to determine if the objects were indeed shackles.

Very few human remains have been found on shipwrecks. Two others include a skull found in a Roman soldier's helmet near Sardinia and a skeleton discovered inside of a sunken sarcophagus near the Greek island of Syrna.

style="text-align: left;">A joint Greek-American archaeological expedition has discovered 22 shipwrecks around the small Greek archipelago of Fourni, revealing what may be the ancient shipwreck capital of the world.

Read the article about the discovery

style="text-align: left;">Hailed as one of the top archaeological finds of 2015, the discovery added 12 percent to the total of known ancient shipwrecks in Greek territorial waters in just 10 diving days.

style="text-align: left;">The cargoes revealed long distance trades between the Black Sea, Aegean Sea, Cyprus, the Levant, and Egypt in all those periods. At least three ships carried amphoras, or jars, that have not been found previously on shipwrecks.

style="text-align: left;">Amphoras may go on displays in museums once conservation work is over.

style="text-align: left;">The archaeologists have only examined about 5 percent of the archipelago's coastline, and are confident that many more wrecks will be discovered as they return to the islands next year.