10 Amazing Zipline Tours All Around the World

If you want to fly but don't have the guts for hang gliding or BASE jumping, ziplining is a fun, safe alternative. With lines that range from 100 feet to more than a mile, locations around the world offer an incredible variety of great opportunities to try it out. Fly at speeds up to 100 [...]

If you want to fly but don't have the guts for hang gliding or BASE jumping, ziplining is a fun, safe alternative. With lines that range from 100 feet to more than a mile, locations around the world offer an incredible variety of great opportunities to try it out. Fly at speeds up to 100 mph over rivers and mountains, past volcanoes and even the Great Wall of China. Go Superman style, upside down, or six in a row. Do it all at these ten amazing zipline locations, nine in different countries and one in international waters. 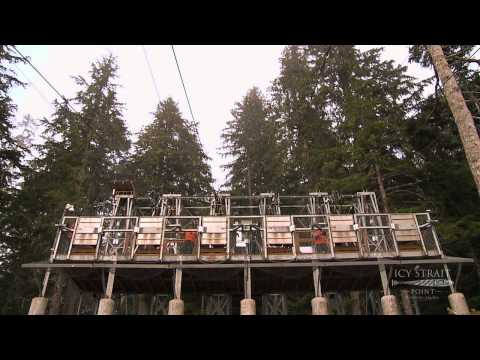 Icy Straight Point in Hoonah, Alaska is a common stop for cruise shops touring the region. They claim the zipline, the ZipRider, is the largest in the world, and it's definitely a formidable ride, running more than a mile, with a 1,300 foot vertical drop over a 90-second ride. Six riders take off simultaneously on parallel lines, and race to the bottom. Built in 2006-2007, the zipline offers an average speed of 60 mph, though the record is 82.

Like all great ziplines, it features a fantastic view. Riders fly over Hoonah's tree-covered mountains and the ocean below. Since its opening, the ZipRider has sent 40,000 riders down its lines, and can handle nearly 400 in a day.

Want to feel like Superman? Pack your bags and head to Taihape, New Zealand, where you'll find Mokai Gravity Canyon's Flying Fox. This zipline turns the activity on its head by turning riders over onto their stomachs, flying parallel to the ground far below. Not as long as the ZipRider, the Flying Fox runs just 3,600 feet, but it makes up for it in speed: Riders hit 100 mph.

Flying like the Man of Steel makes it easy to appreciate flying through the Rangitikei Canyon, over the riverbed nearly 600 feet below. The zipline then runs under a bridge and up towards a cliff face. The Flying Fox isn't a one way system; you roll back and forth a few times (so you really have the time to look around), until you stop in the middle. Then the crew pulls you back in, so you can get back in line to do it again. 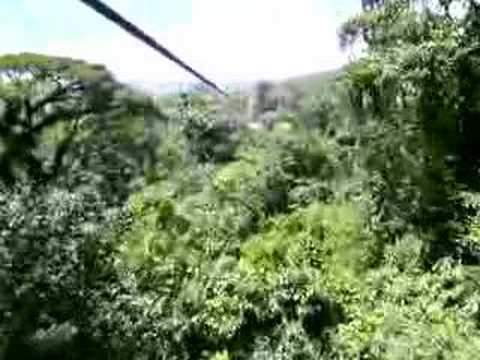 If you've seen Dante's Peak or know anything about the eruption of Mt. Saint Helens, you might want to stay away from the zipline at Costa Rica's Arenal Volcano Park. That's because the nearly two-mile ride over a series of zip lines takes you through the jungle, over Arenal Lake and right past Arenal Volcano, which last erupted in 1984 and is still active today. But don't worry too much - park rangers constantly monitor the lava flow to ensure your safety.

The Sky Trek, as it's called, is part of a larger program that also includes a Sky Walk along bridges in the jungle canopy, and a ride in an open-air gondola that takes you into the treetops so you can zip back down. Like Hocking Hills, Arenal offers night ziplining. Arenal Volcano park is also near the not-to-be-missed Monteverde Cloud Forest, so it's a trip you can't pass up. 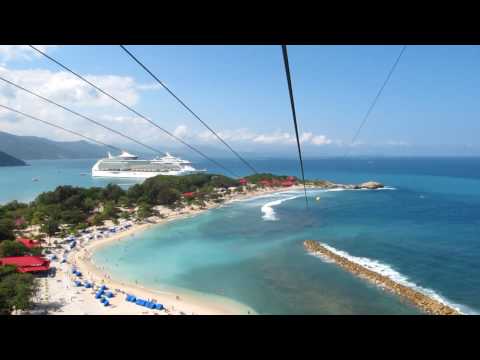 The giant zipline in Labadee, Haiti caters to passengers on Royal Caribbean cruises. Proclaimed as the longest zipline over water in the world, it runs 2,600 feet over a cove. Enjoy the views of the sky blue water and mountains in the distance as you coast down the 500-foot vertical drop at speeds between 40 and 50 mph. 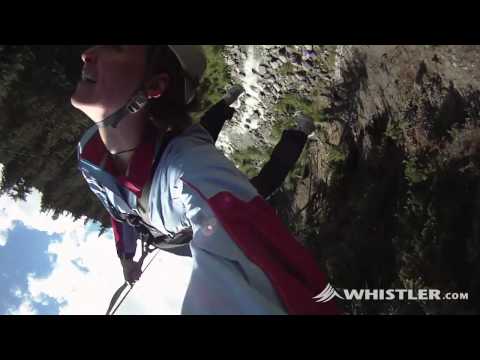 There's no need to go to the tropics to find a great zipline. In fact, you don't even have to wait for summer. The zipline at Whistler, British Columbia, which played host to much of the2010 Winter Olympic Games in Vancouver, is open year round. The views from the ride change with the season - a winter trip takes you through a snow covered old-growth forest and over frozen creeks. A summer ride takes you through the same forest, transformed: The creeks are running and the snow is gone.

The zipline tour includes five lines that run from 200 to 1,000 feet, including a "freestyle" line that lets you hang upside down. So if you're in BC and you're tired of skiing, why not give ziplining a shot?

6. Flight of the Gibbon, Thailand 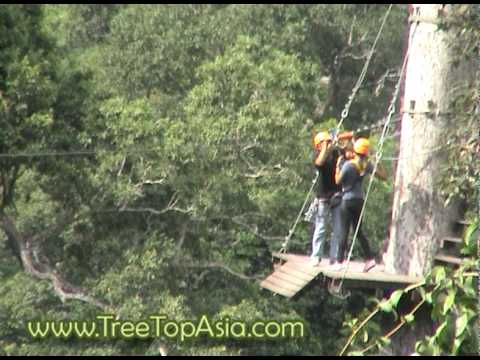 The zipline is just one part of the adventure tours offered by Flight of the Gibbon in Thailand. Rather than one long, exhilarating ride, the tour involves ziplining between treetop platforms, and rappelling descents. But that's not all; there's also river rafting, mountain biking and rock climbing. Unlike most of the ziplines here, Flight of the Gibbon focuses on being educational as well as fun.

Visitors learn about the local animals on the animal safari tour and Thai culture with a village home stay. With locations in Chiang Mai, Bangkok and Pattaya, you can zip your way through the country. Maybe the best part is that the money you pay to experience the jungles of Thailand goes towards protecting them - 10% of Flight of the Gibbon's profits go to protecting the endangered gibbon and the rain forests it calls home. 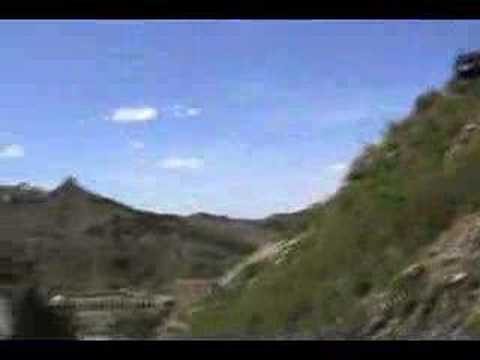 While most ziplines offer gorgeous views of nature, few involve one of the seven wonders of the modern world. But the zipline in Gubeikou Twon of Miyun County does just that, and the way to get to its starting point is to hike up the Great Wall of China. After your climb (or chairlift ride), you can explore the Simatai section of the wall, with its 35 watch towers and architecture from the 6th century.

After that, there's no reason to walk back down when you can travel by zipline over Mandarin Duck Lake, offering a unique and marvelous view not only of the Great Wall, but of the mountains over which it climbs. The problem is that the zipline is temporarily shut down for safety concerns, but hopefully everything will be resolved and you can be in the air soon. 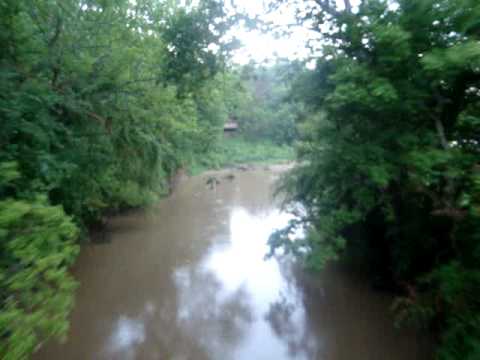 You don't have to take a whole vacation or travel to an exotic place for great ziplining. Rockbridge, Ohio is home to Hocking Hills Canopy Tours, where you'll find the SuperZip. Running a quarter mile and offering speeds up to 50 mph, this line sends two riders going "Superman" from a canopy tower down into the forest, over a cliff and over the Hocking River.

In addition to the SuperZip, you can take the three-hour canopy tour, a series of ten shorter, calmer ziplines, and learn about the flora and fauna, as well as local history. And if you get tired of the view in the daytime, Hocking Hills also offers night zipping on weekend nights. With minimal lighting, you can ride six ziplines and cross four skybridges in the darkness. 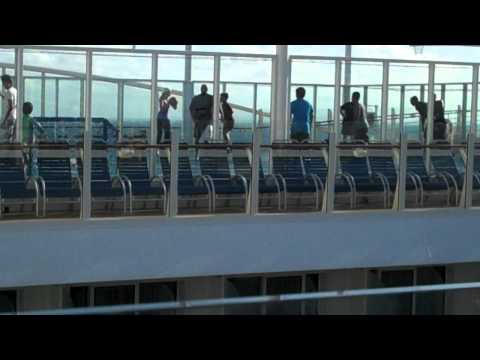 The zip line aboard the Royal Caribbean's Allure of the Seas makes the list not for its amazing stats, but for its novelty. Based on videos of the ride, it lasts a little under 10 seconds, so it hasn't got anything on the all-day adventures of some of the ziplines here. But the appeal of being able to fly nine flights above the boardwalk occupied by your fellow vacationers is pretty cool.

And if you're lucky enough to be headed toward a great Caribbean zipline, it's good practice as well! 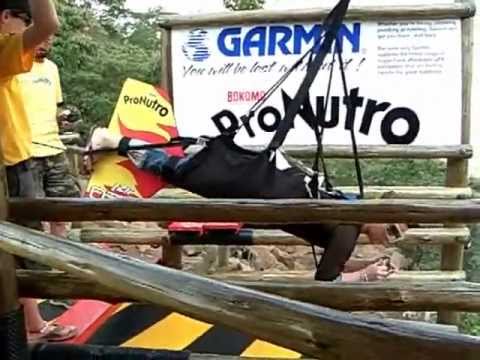 The only way to end this post is with a bang, and this is the zipline for the job. Like the ride at Icy Straight Point in Alaska, the Zip 2000 in Sun City, South Africa claims to be the longest zipline in the world. With a 6,500-foot ride - compared to 5,330 feet in Alaska - it looks like the Zip 2000 comes out on top. For the world's fastest title, it will have to take a back seat to New Zealand's Gravity Canyon, with 93 mph to GC's 100.

But regardless of the stats, the Z2000 looks like it may be the world's overall best zipline. Riders hang two-by-two, "Superman style" from the cable with a fin between their legs for extra speed. As the South African grasslands unfold nearly 1,000 feet below, you'll find that this is the very best of ziplining: high speed, a long ride, a gorgeous view, and a great adventure.